The following is our money saving ebooks news release, scheduled to be published on Tuesday, January 24, 2023, at 6 a.m. 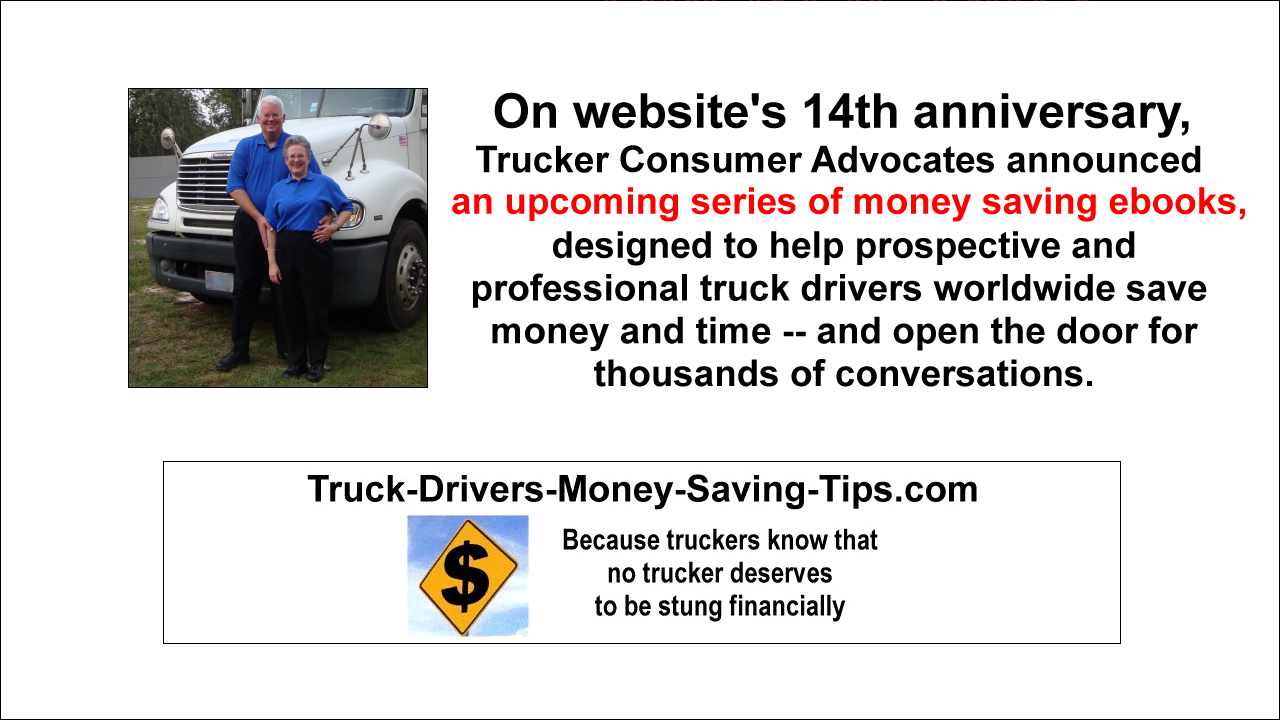 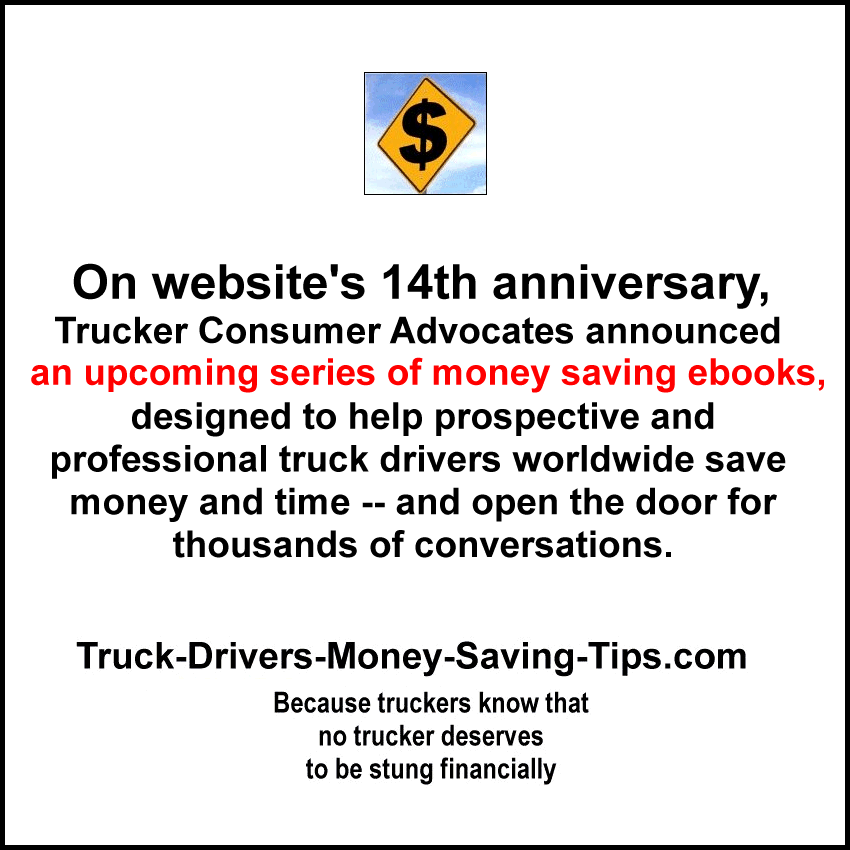 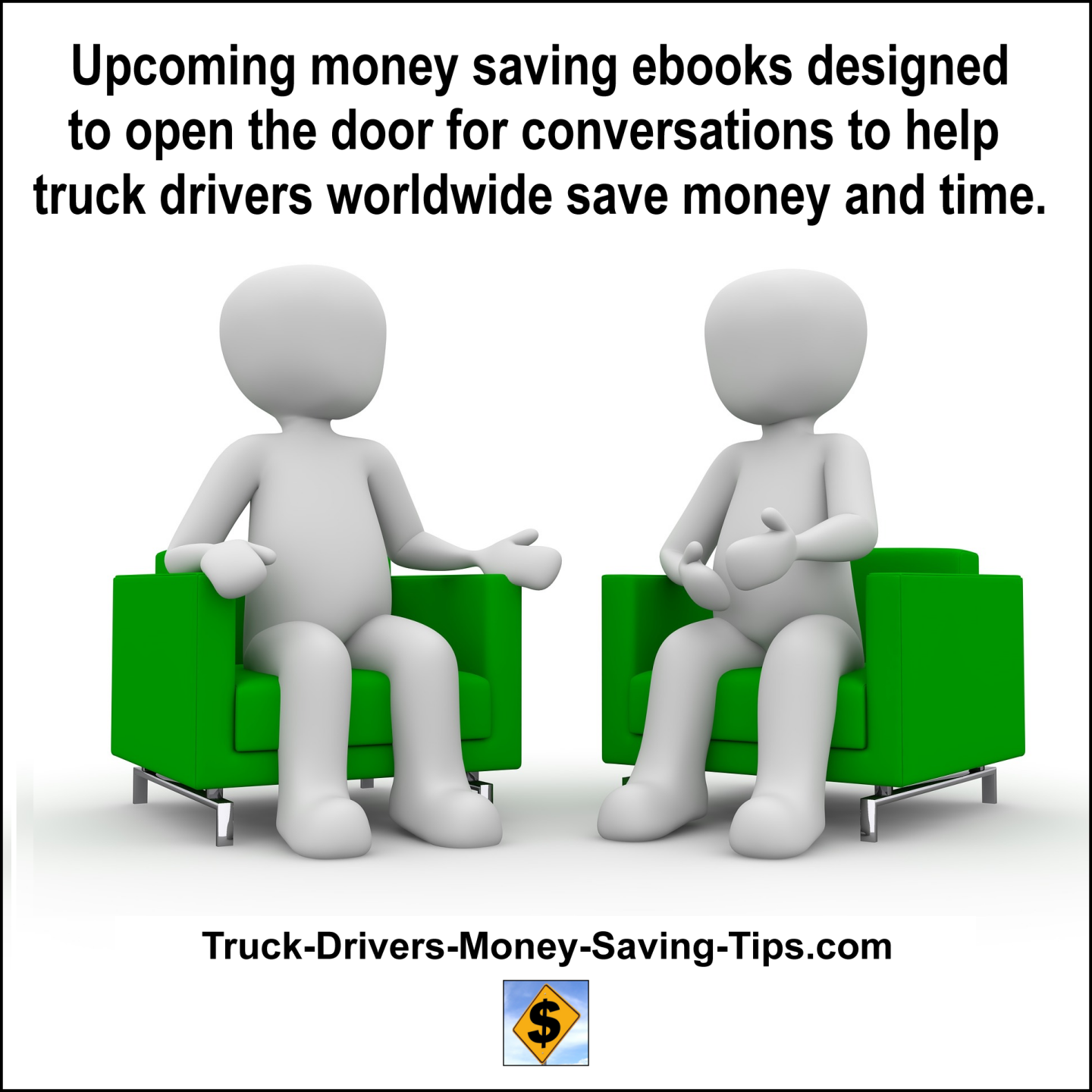 On the 14th anniversary of the truck driver financial advice website Truck Drivers Money Saving Tips, trucker consumer advocates Mike and Vicki Simons announced an upcoming series of ebooks that are designed to help prospective and professional truck drivers save money and time — and will open the door for conversations to help truckers worldwide save money.

The couple created Truck-Drivers-Money-Saving-Tips.com in 2009 because they had been stung financially as truckers and wanted to help prevent others from undergoing similar negative experiences. That’s why their site’s slogan reads: “Because truckers know that no trucker deserves to be stung financially”.

“From the beginning,” Vicki Simons stated, “we envisioned Truck-Drivers-Money-Saving-Tips.com as a clearinghouse of how professional truck drivers from around the world save money — in order to help each other save money.”

With her analytical mind and a deep desire to understand how different truckers face different situations in trucking, Mrs. Simons is uniquely qualified to write and publish ebooks designed to help professional drivers — and those seeking to enter the trucking industry — to save money and time.

Not only does the Simons’ website contain well over 1,400 pages’ worth of content — over 400 of which were submitted by their readers — but Vicki has also:

– written and published well over 3,300 truck drivers money saving tips and inquiries — each in 140 characters or fewer — since January 2010; and

– researched news, compiled articles, and provided her commentary on news within the trucking industry each week since February 2017.

Her goal in writing money saving ebooks is to spur thousands of conversations to help prospective and professional truck drivers worldwide save money and time.

Vicki approaches trucking industry news with a desire to understand it from the professional truck drivers’ perspective, so that she can report it and help truckers save money and time.

As an example, she recently posted in a social media trucking group an article about one trucker who died because the tires from another trucker’s rig separated from his/her truck and burst through the windshield of the first trucker.

In the article, a law enforcement officer was quoted basically as saying that conducting a thorough pre-trip inspection would have caught the problem and prevented the fatality.

Another trucker on the social media trucking group disagreed with the officer’s assessment.

Vicki asked for — and received — a description and illustration to show that it is possible that the trucker whose truck lost tires might not have been able to see the problem during a pre-trip inspection.

Mrs. Simons is writing her ebooks in a style that she has never seen published in ebook format for truckers before, which she says will provide quick, tangible value for those in — and those looking to enter — the world of professional truck driving.

Furthermore, the ebooks will contain the answers to questions that Vicki has asked veteran truckers.

In addition to the ebooks themselves, she plans to provide videos and audios of her content; a series of fillable PDF documents to help truckers and truck driving students; as well as ongoing group coaching.

Mike and Vicki Simons look forward to receiving feedback from thousands of truckers as a result of the publication of the first version of each of her money saving truckers’ ebooks.

A video about their announcement regarding the upcoming money saving book series can be found at:
https://youtu.be/_TG3lJHmu1c

Since 2009, Mike and Vicki Simons have helped untold numbers of professional truck drivers and their home support team members save money in many different ways. The couple’s 31+ years of marriage, frugal lifestyle and commercial driving experience serve as the basis for helping truckers save money. The couple has published hundreds of articles, reviews, and commentaries on their site; sent thousands of news snippets to their blog; published well over 150 free monthly email newsletters; and distributed thousands of truck drivers money saving tips and inquiries.

Want to provide input on what you’d like to see in our money saving ebooks?
Click here.

Need more information or have a question about our money saving ebooks news release?
Click here.

Cooking a Ham and Cheese Omelette in Your Tractor Trailer

Lug Nut Covers: Truck Accessories Basics and How to Save Money on Them

Beef Stroganoff: An Easy Recipe to Prepare in Your Truck