Many a trucking company offers a sign on bonus as an incentive for potential truckers to hire on with them. 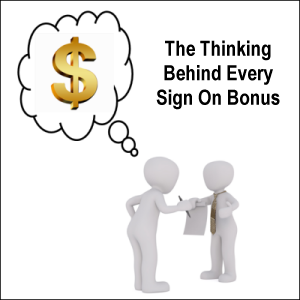 Likewise, many a truck driver — whether experienced or not — has been lured to those companies that offer these incentives.

Some of the bonuses advertised are well into four figures ($1,000 or more).

If you search for the phrase on Twitter, you’ll see plenty of job opportunities.

Before you hire on with a bonus-offering company, the following are things that we think you should know.

These things are especially important if you are thinking of changing trucking companies in order to receive cash.

A Sign On Bonus: Why Do Trucking Companies Offer Them?

Trucking companies constantly deal with the issue of driver turnover.

There are both voluntary and involuntary separations.

Most companies are constantly advertising and recruiting new drivers in whatever way works.

You’ve probably seen displays inside and just outside the doors of truck stop buildings with at least a half-dozen publications or cards — like the one shown at left — advertising jobs for both company drivers and owner-operators.

Naturally, putting the money out in front of someone is a good way to help spur some folks on to seriously consider one trucking company above another.

Offering a sign on bonus to lure in good drivers may be a less expensive alternative than other methods of advertising or recruiting.

Does Truck Driver Turnover Affect a Company Sign On Bonus?

Did you notice one word in particular?

According to the author, the trucking companies are desperate.

The Cost of Trucker Turnover 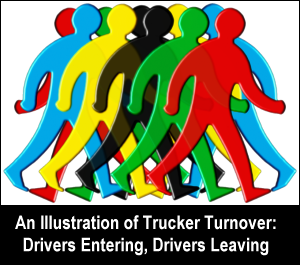 In the Fall of 2010, a study was conducted on the cost of driver turnover.(2)

On page 2 of that report, we read:

The average replacement cost per driver is approximately $12,0002, but according to some estimates that cost could exceed $20,0003.

The down side for trucking companies offering a sign on bonus due at or shortly after hiring is that they may attract drivers who are desperate for what seems to be “free cash.”

What is to prevent drivers — once they have “jumped ship”

— from jumping ship yet again when another trucking company offers a better bonus?

Before you even get to the contract (if there is one), make sure that you qualify to be hired.

There’s no sense getting all worked up about hiring on and getting a hiring bonus if you don’t have what it takes (especially years of experience) to get hired.

Note, too, that trucking companies don’t just hand out money without expecting something in return.

Find out what their conditions are — or what they expect you to give — in return for your sign on bonus.

Will you have to work for the company for X number of months or years in return for getting the bonus?

When will you be paid your signing bonus?

Depending on the company, any of the following (or potentially other) scenarios may apply: 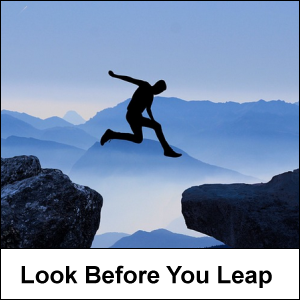 Under no circumstances should a driver allow himself/herself to start a job thinking that there is one requirement to gain a sign on bonus when there is really something else or something additional that needs to be done first.

Never allow there to be a “chargeback” to your account (as can happen in the insurance industry and some commission sales).

By this, we mean a situation where you get paid what you think is your sign on bonus and then the company demands it back if you don’t fulfill your end of the bargain.

Make sure that the signing bonus you receive is wholly yours.

Know what you’re getting into before you get into it.

How Will a Sign On Bonus Affect Other Pay?

Let’s imagine that a huge bonus is available from the fictitious GHI Trucking Company.

How will you know if pursuing a job with this company is right for you?

Some questions to ask include:

We’re going to dream up some numbers to illustrate a point:

Was this a bargain for the driver or the company?

Notice we said “the first year.”

If the driver is given yearly increases that never meet up to the “average pay rate” for a driver with his/her level of experience, the problem could be perpetuated year after year after year!

You can plug in your own numbers to determine how much this kind of scenario could cost you.

There are companies that offer signing bonuses to teams.

If the team drivers are not a married couple, the individual members will have to decide how to split the bonus (unless, of course, the company does the splitting for the drivers).

This gets a little tricky if there is a more experienced team driver paired up with a less experienced one.

In that case, there may have to be a “gentlemen’s agreement” between you regarding what a good split is.

Another thing that teams need to be concerned about is split pay.

Potentially, there may be a “first seat driver” and a “second seat driver” in a team, with the first getting a slightly higher pay rate than the second.

As we say on our truck driver training school page, we were kidded by our classmates about split pay rates for team drivers when we were looking to get hired on fresh out of school.

Separately, we were asked by our trucking school classmates, “Are you going to let him/her earn a penny more per mile than you are?”

They tried to pit us against each other, but as a married couple, we were going to keep all that lovely money in the family!

Never let money become an issue between you as a team.

Decide what is fair to both of you.

You’ve got enough to be concerned about every day moving freight.

Remember that article we cited above that said that trucking companies were desperate to hire drivers?

The largest sign-on bonus we’ve ever seen advertised by any trucking company was detailed on TruckingInfo.com on February 14, 2012: $15,000 for teams.

If it is split evenly, that boils down to $7,500 for each team driver.

From our perspective, that is a huge chunk of change!

Besides the standard questions to ask recruiters of trucking companies, we recommend that you get the answers to these questions before accepting any astronomical amount of money just for hiring on:

Why do we recommend that you ask around in the trucking forums?

Something may have happened internally at a company that the company wishes to keep hush-hush but which other drivers know all about and are willing to share that could affect hiring.

Churn, Baby, Churn: A Parallel Drawn Regarding a Trucker Sign On Bonus

In the investment world, there is a term called “churning.”

We’re going to list a couple of definitions here and make application to the trucking industry.

Where to Research Driver Turnover

As a point of comparison, here are two resources where you may look up turnover in the trucking industry:

Of course, neither of these gives a breakdown regarding a specific trucking company.

You’ll need to dig for more info there.

Offering a Non-Cash Option Instead of a Sign On Bonus?

We’ve never heard of this happening before, but it is bound to have crossed someone’s mind to offer drivers products or services “valued at” the amount being offered in a hiring bonus.

For example, let’s say that an owner-operator company makes a deal with a newly hired driver to perform 5 oil changes or PMs in exchange for a signing bonus.

This could turn out to be favorable for the driver — as long as the work that is done is competent, correct and complete.

It does not hurt in cases like this for a driver to verify that work has been done as it should have been done.

Money saving tip: Do thorough investigating regarding whether or not a sign on bonus will actually be a bonus — or a stumbling block — to you.

If you end up with what is truly a bonus, consider carefully how you will save or spend it.

If you have debt, you may want to apply it to that so that you can be debt-free.

Another avenue of investment it to make sure that you have your emergency fund in place.

Make sure you read the fine print before you sign any contract.

Don’t just take a recruiter’s word for it; after all, he/she is paid by how many “warm bodies” they hire to fill trucks.

If there is something you don’t understand, ask.

If something can be interpreted two or more ways, make sure you understand which way they will interpret it.

One time in a different industry, Vicki signed an agreement that had a clause that she took one way, but the employer took another. It cost her.

So, be on your guard against cleverly worded double meanings in contracts.

Under no circumstances should you ever find yourself in a position where you are being exploited.

Return from Truck Driver Sign On Bonus: What to Know Before You Hire On to our Employee Benefits page or our Truck Drivers Money Saving Tips home page.

The Travel Packing List of One Money-Saving Pro OTR Trucker