Do you enjoy a good bowl of split pea soup? 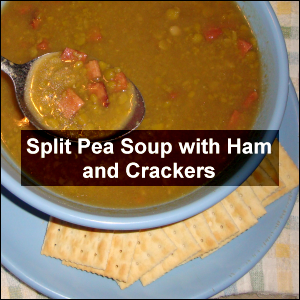 Did you know that you can enjoy it right in your truck?

Your options include these preparations:

Where Are They Sold? 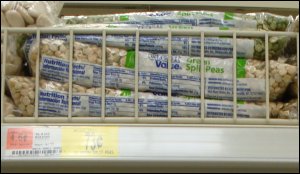 You can find split green peas in the dry beans and peas section of many grocery stores.

This is a photo of the display of green split peas in one of the stores in our home area.

At the time this photo was taken, they were being sold for $0.73 per pound.

You can also buy them in bulk in some stores and online. 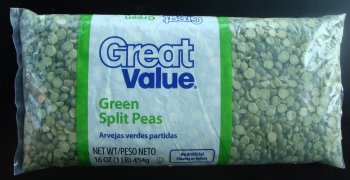 While some folks may skip soaking beans or peas overnight, Vicki learned this from her mom and has always found it beneficial.

Obviously, in order to soak dry split green peas overnight, you need to plan the meal the night before.

Shortly before bedtime one night, Vicki took one pound of dry split green peas and measured them into the crock pot.

Yes, there really were about 13 quarter-cup servings in the bag, as the information on the Nutrition Facts panel stated.

She added 6 cups of water to the crock (to make sure that the peas would stay submerged even after they swelled). Then, she stirred up the peas and let them sit overnight.

If Vicki had been preparing split pea soup on a standard stove, she would have brought the peas in the water to a boil the next morning and then drained off the water.

We have used a hot pot to do the same thing in-truck.

However, with one batch, Vicki decided to see if she could accomplish the whole process in the crock pot.

The next morning, she turned the crock pot on low (with the peas and the soaking water in it) to let

She didn’t count how long this process took, but it was probably about 3 hours.

When we got to a stopping place, Vicki strained the peas into another bowl with a slotted spoon and disposed of the soaking water.

She put the peas back in the crock, measured in 4 cups of fresh water, and 6 beef bouillon cubes for seasoning (a 1.5-to-1 ratio of bouillon cubes to the newly added water).

Then, she mixed the peas up and again set the crock pot on low.

Health Note: We no longer use bouillon cubes (chicken or beef) because one ingredient typically always found in them — usually either monosodium glutamate (MSG) or disodium inosinate — is toxic. 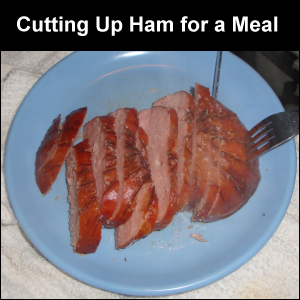 While some people add other ingredients like potatoes or carrots into their batches of split pea soup, we like to add just ham.

So, we have no experience in knowing how much time is required to cook the other vegetables without making them mushy.

About an hour or two before we planned to stop, Vicki took the last little bit of ham (maybe 1/3 pound) from a 3-pound chunk that we’d bought, cut it into small chunks and added it to the pot.

She stirred the ingredients and let the crock pot continue to cook the soup.

Crock Pot: Put it on Low and Let it Go 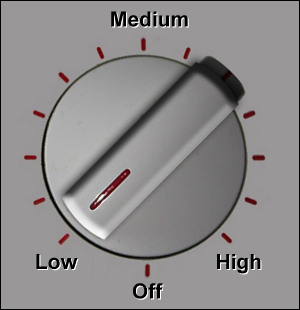 One of the beauties of using a crock pot is that it cooks on lower heat over a longer period of time.

Because of the lower temperatures, some foods are pretty forgiving.

This is certainly the case with our batch of split pea soup.

Every once in a while — especially when the truck hit a bump while the soup was cooking — we would smell a little whiff of steam come out of the crock pot.

Servings From This Preparation? 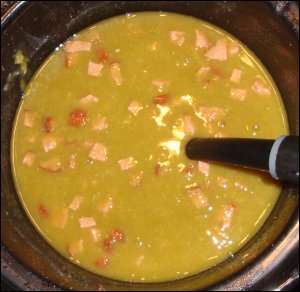 Vicki wondered how much soup we’d have left over after eating our fill with unsalted top crackers:

We were so hungry by that time of night, that between us, we ate the whole batch!

The photo here shows this batch of split pea soup with ham in the crock — with the bowl of our ladle submerged in it and ready to dip the soup into bowls.

Health Note: Now we use a reduced amount of table salt in place of the bouillon cubes.

Cost of This Dish 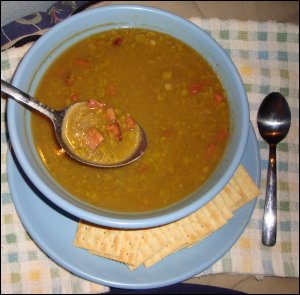 As we mentioned above, there are other ways to prepare and warm split pea soup.

In the photo here, you will see the soup in a bowl with an obvious “ring” above the level of the liquid on the left.

This is because this particular batch of canned split pea soup was rewarmed in a microwave oven.

Because of the problems associated with microwave oven use, we eventually replaced that as our appliance of choice regarding rewarming food.

Comparing Our Soup with One Commercial Variety

We’ve tried commercially canned split pea soup, but the Campbell’s brand is too salty for us.

Compare, for example, the amounts of sodium in equal portions (such as 100 grams) of these two preparations of split peas:

The point is that when you make your own split pea soup (or any soup), you can season it the way you like.

You may wish to experiment with the amount of bouillon-to-water or salt-to-water ratios in your batches.

Vicki found that she used fewer teaspoons of salt than bouillon cubes in preparing dried beans and peas.

Split peas have a high percentage of protein.

According to NutritionData.com, in their raw, mature seed form, they have about 25% protein and 26% dietary fiber.

If you like, you may compare and contrast all of the nutrition data for all forms of split peas for yourself.

Money saving tip: Dried beans and peas are among the best values (nutritionally and financially) for a meal, especially when eaten as a main course.

Although we like to fix split peas (specifically the green ones) in split pea soup, there are lots of recipes using split peas online.

We never recall seeing any truck stop restaurant serving split pea soup (although there may be other bean soups served).

However, even if it were served, how much would you pay for a bowl of it there?

Would you have to get their “soup and salad” menu item just to get the soup?

How much would you spend in contrast to the cost of what you can fix in your truck?

Consider the possibility of keeping at least a pound or two of this dried vegetable in your truck (with your crock pot and seasoning, of course), especially as a back up for times that you might get stranded in the winter and need something nourishing and filling.

For home support teams, you might be able to save money by buying split peas in bulk.

Watch for sales and use coupons where you can.

Remember: If you’re cooking in a crock pot while you’re rolling down the road, somehow brace your pot so that it won’t rock or tip over.

Also, brace the lid so it doesn’t flop around.

On Driving in Wind — Strong Winds — in a High Profile Truck

Attitudes on Saving Money and Encouragement to Start Saving Now