Every trucker using truck tarps with holes to cover flatbed loads of moisture sensitive freight needs to understand that there are costs that can affect profitability. 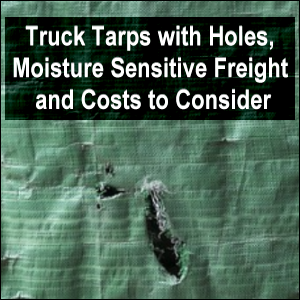 Freight to be Tarped

Imagine for a moment that on his or her flatbed, there are three different kinds of products which may be subject to rain or road spray:

Among the types of product that cannot get wet are sheet rock (dry wall) and insulation.

What happens if in spite of the need to keep products dry, truck tarps with holes are used to “cover” the load? 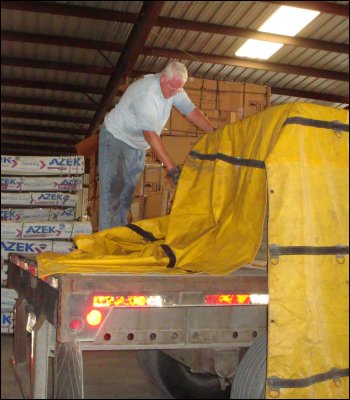 Let’s further imagine that a driver takes a load covered with tarps with holes in rain (or even road spray) to a customer.

If the products on board have gotten damp (or downright wet) and potentially damaged, the customer has every right to refuse that part of the load.

Assume that the driver delivering the products has a local truck driving job.

When product under tarps with holes has been refused, let’s suppose that the driver has to take that part of the load back to his company’s terminal.

Depending on the extent of the damage, the affected part of the load always incurs some kind of loss by having to be:

Why is loss incurred from re-delivering it later?

The Cost of Re-Delivering Freight 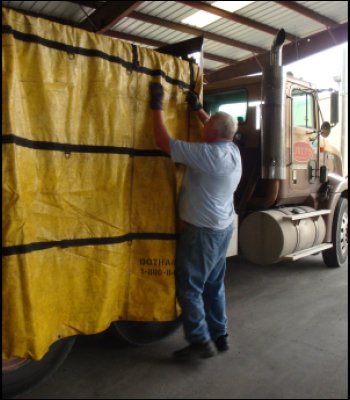 Let’s assume that the part of the load that the customer rejected — because of tarps with holes — takes up just 15% of the space on the trailer and/or weight of the whole load.

If the driver was planning to make a pick-up after delivering his/her product, that much less space/weight is available for a new load.

Furthermore, if that part of the load can be delivered later, it will have taken twice the amount of

In this case, there may be a loss to the trucking company but not a company driver.

Truckers who are paid on a percentage of the load come out on the losing end. 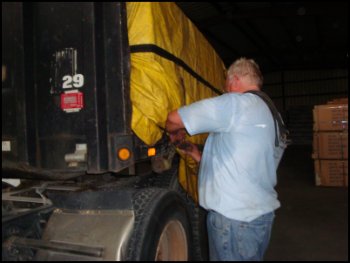 It would be far better for trucking companies to regularly inspect their tools and equipment for tarps with holes.

In this way, they can find out where loss is occurring.

Questions to ask include:

If a Damaged Load is Delivered Once… 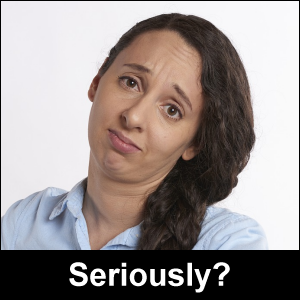 Not only must the raw numbers be taken into account regarding tarps with holes, but if a customer has been offered potentially damaged freight once, he or she is going to be especially wary of future loads delivered in damp or wet conditions.

You don’t want to damage your reputation for delivering high quality products by neglecting maintenance or replacement of truck tarps with holes.

A real point of contention occurs when drivers are held responsible for protecting their loads from rain and road spray, but when the tools they are given with which to do it are in inferior condition.

Using tarps with holes to cover freight would be like you going out in the rain with holes in your umbrella!

Truckers whose jobs are on the line if they don’t protect their loads are especially vulnerable. 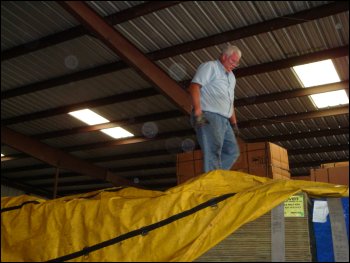 It’s pretty sad when truckers driving for trucking companies that are supposed to be profit-driven keep their drivers in a conflicted position.

Truckers shouldn’t have to beg for the tools and equipment to do their jobs.

Tarps with holes should be repaired or replaced!

Still, every once in a while, a trucker has to point out the obvious to someone in a position of authority.

The following is a trucker’s email (which has been edited only enough to remove personally identifiable information).

Money saving tip: Regularly inspect the tarps you use on your truck. If there is a hole, it is best to repair it when it is small.

The life expectancy of a tarp depends on many factors.

It is better to replace tarps with holes than run the risk of attempting to deliver product in an unacceptable condition. Mentally, put yourself in your customer’s shoes and see how it feels to be offered damp or wet moisture-sensitive products.

Professional truck drivers who know that the tarps assigned to their truck have holes in them, need to report them to their company.

If the need for new tarps has been made known — but none are provided — it is time to document with photos exactly what they are up against.

If necessary, invest in a moisture meter to measure the moisture content in your product several times to prove your point.

Can part of your load be covered “under” the tarp with a type of bag?

If so, investigate the possibility of using that kind of product.

Every time a trucker has to climb up on a flatbed trailer in order to tarp a load, he or she runs the risk of falling off the trailer.

Some truckers wear devices attached to an overhead system to help them avoid falls. These devices are generally stationary at a location, not moving with the truck.

Although it has a steeper upfront cost, an automatic tarping system has been said to pay for itself quickly.

Return from Truck Tarps with Holes, Moisture Sensitive Freight and Costs to Consider to our Tools and Equipment page or our Truck Drivers Money Saving Tips home page.

Low Clearance Bridges and Overpasses: How to Watch for and Avoid