This is the TDMST Weekly Round-Up of news affecting professional truck drivers, written by Vicki Simons for the week ending May 4, 2019.

1. Regarding the fatal truck crash near Denver:

Many news outlets, trucking websites and social media channels have been abuzz ever since a trucker crashed into traffic near Denver, Colorado, on April 25, 2019.

First, we express our condolences to the families of the 4 people who died as a result of this crash.

Many questions have surfaced, some of which have been answered since the crash occurred.

This article states that the trucker has been “charged with 40 counts — most of them felonies — for his role in a 28 vehicle pileup crash on I-70 near Lakewood, Colorado, that killed four men”. 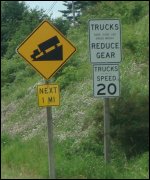 Descending a mountain grade in a truck is a very serious matter and we have addressed Hot Brakes or Worse: Improperly Driving Downhill in a Big Truck on our site.

There are some good tips about safely descending mountain grades or “killer hills“.

One website lists steep mountain grades where runaway truck crashes have been analyzed.

That site also covers truck driving standards and reminds folks that the “Required knowledge” that truckers must have is covered under 49 CFR § 383.111.

Two parts of that required knowledge include:

2. Regarding taking a runaway truck ramp:

A video showing what happened was recorded and embedded in this April 30, 2019, article.

Another article covering the runaway truck ramp episode is here.

I wrote the following within a Facebook group about the trucker taking his truck into the runaway truck ramp:

… Please note: One of the regional trucking companies for which my husband Mike Simons once worked stated that if one of their drivers ever took a runaway truck ramp, he or she would be fired.

It is very important to
– have truck brakes correctly adjusted and
– learn how to properly descend a mountain grade.

One of the group administrators replied, “…fired for taking a ramp? Would they rather have them kill people???”

Thanks for sharing.
I think [the trucking company’s] rationale is that they expect drivers to keep their brakes correctly adjusted and descend grades properly.
While they had mechanics in their shop to adjust brakes, I don’t recall that they had any refresher training on how to descend mountain grades.
Honest question: what if a truck with otherwise correctly adjusted brakes experienced mechanical failure beyond a driver’s control?
Threatening a driver with his or her job for not taking a runaway truck ramp when it is truly needed, in my opinion, is as wrong-headed (even if not on the same par as):
– threatening to punish a driver for doing a hard-brake (which, depending on the circumstances, could prevent a fatality); and
– saying that every truck accident is preventable (when it has been proven that many truck accidents are the fault of the driver of the other vehicle).
I think some of the folks who work in trucking company safety departments have no actual trucking experience and hence no clue what some truckers face.
{Sigh!}

3. Regarding trucking companies that suddenly shut down:

According to this article, Falcon Transport “suddenly ceased operations” of its 700-truck fleet on April 26, with the following fallout:

A class action lawsuit has been filed against the company by drivers and other employees, for allegedly violating the WARN Act.

One ray of hope has been the outpouring of help from various sectors of the trucking community, including:

I also offered help for Falcon drivers in our area.

Also, on May 1, Williams Trucking LLC based out of Dothan, Alabama, announced they were shutting down.

We encourage every trucker to have enough money saved up in his or her emergency fund to get home from one side of the country to the other.

One of the unanswered questions regarding any sudden trucking company shutdown is:

What happens to a trucker’s DAC report if he/she is told to abandon a truck?

In the news this week were these two articles about helping to prevent cargo theft:

5. Regarding Hours of Service overhaul:

According to reports here, here, here(e), here and here, the U.S. Department of Transportation and FMCSA anticipate releasing the proposed revised Hours of Service regulations for truckers on June 7.

6. Regarding repealing a 102-year-old truck tax:

According to a May 1, 2019, article, two Congressmen have introduced the “Modern, Clean and Safe Trucks Act of 2019” (H.R. bill 2381), that would “repeal the federal excise tax (FET) levied on most new heavy-duty trucks and trailers.”

News about this bill was also covered here and here.

This year’s event will be held from July 14 to 20 “with a focus on speeding”, according to this source.

Separately, CVSA’s International Roadcheck is scheduled for June 4-6, according to this article.

8. Regarding a trucker killed by his own truck:

A May 2, 2019, article reported, “Police believe that Perry was underneath his trailer making an adjustment to the rear tires when the trailer somehow shifted, leaving Perry pinned underneath.”

Another article reported this fatality.

If you’re going to get under your trailer to inspect or adjust anything, make sure that ahead of time, you:

TRUCKER UNDER TRUCK!
DO NOT DRIVE!

On April 30, the driver of a dump truck was traveling in the Cleveland area with his bed in the raised position and struck a pedestrian bridge!

If you drive a vehicle or haul a trailer that can raise its bed:

Don’t use wasp spray as a means of defending yourself from people.

One trucker did and now he faces assault charges.

Every time I read about trucking companies that pay out millions of dollars for something preventable, I can’t help but think that that money could have been paid to truckers.

Among the most recent cases involved:

The Golden Rule still reads: “Do unto others as you would have them do unto you.”

* Chocks are intended to be placed in front of or behind a tire to prevent the unit from moving in that direction.

The following type of chock is available from Amazon.com, with which we have an affiliate relationship.

a. www.landlinemag.com/Story.aspx?StoryID=74143 (no longer online)

b. www.landlinemag.com/Story.aspx?StoryID=74159 (no longer online)