Student drivers learn the theory of how not to get hot brakes when driving downhill in a big rig. 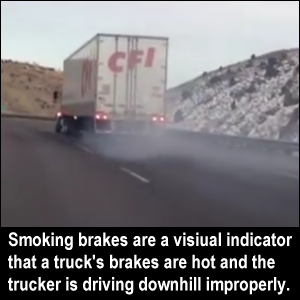 But the theory learned in truck driver training school can go completely out the window when the student reaches the open road.

Numerous truck drivers through the years have overheated brakes, smoked brakes or even “lost brakes” on down grades because of failure to

On this page, we will cover the cost of improper brake adjustment.

How Common is the Brake Problem in Big Trucks?

According to a September 2011 article, “More than 50 percent of commercial motor vehicle out-of-service violations cited during roadside inspections [during the Commercial Vehicle Safety Alliance’s annual Brake Safety Week] were for brake-related violations”.

Obviously, any professional truck driver whose truck has improperly adjusted brakes can be put out of service or fined or both.

Richard Ryan (@sclaus2u on Twitter) wrote about the close call he once had when going downhill in his truck.
rictheturtleryan.blogspot.com/2011/11/how-not-to-go-down-hill-hope-somebody/ (no longer online)

He hadn’t adjusted all of the brakes on his truck before going down a steep grade and almost ended having total brake failure.

Were it not for another driver who knew the road and had enough experience to guide him, he would not only have had hot brakes and smoking brakes but loss of brakes!

Richard tried to capture an old saying that goes something like this:

“You can go down a hill a thousand times too slow, but you’ll only go down once too fast.”

Our Experience with Smoking Hot Brakes

Both of us have had our share of hot brakes and smoking brakes on the road.

Vicki’s only experience with this — which she declared she would never have again, and didn’t — was descending the famous “Grapevine” grade in California (Wikimapia reference).

The posted speed limit for trucks was 35 mph and that should have been enough.

Were it not for God’s grace and the Jake Brake (engine brake), her smoking hot brakes would probably have caught on fire.

Did Vicki learn her lesson?

We later drove for U.S. Xpress during in the days when the owners of the company didn’t believe in Jake Brakes.

So when she took Deadman’s Pass (aka “Cabbage Hill”) on I-84 in Oregon with a particularly heavy load, she crept down the mountain at 9 mph (yes, “nine miles per hour”).

She was going so slowly that a family of 4 deer leisurely ambled across the road right in front of her and she chuckled.

She wasn’t about to repeat her hot brakes experience.

There are a number of mountain passes in Oregon.

Vicki also clearly remembers taking a heavy load of boat engines down the eastbound grade on I-68 to Cumberland, Maryland while driving for USX.

The thing that was so extraordinary about this trek was that the left lane was closed and — again, because there was no Jake Brake on the truck — she carefully descended the grade at a slow rate (25 mph comes to mind).

She knew that the folks behind her wanted to go faster. But she had to do what was right for her vehicle.

When she got to the stop sign at the bottom of the ramp at her exit, there was nary a wisp of smoke coming off the brakes — just the way things were supposed to be!

Mike has smoked his truck’s brakes a number of times, most notably on I-17 in Arizona.

There are a number of notorious hills and mountain passes in the USA that professional truck drivers need to be aware of.

Some even have runaway truck ramps. Many of them are preceded by ample warnings about large trucks slowing down and have posted maximum speed limits.

If you are new to truck driving or simply need a refresher, we recommend that you familiarize yourself with a listing of some famous downhill grades.

We have searched for and found articles regarding truck speed going downhill on California’s Grapevine.

In our opinion, the worst grades are those that become covered with snow and ice in the winter, making them that much more slick and slippery.

Jim Park, Equipment Editor for TruckingInfo.com, stated in a July 2012 On the Road Blog post that “truck brakes don’t fail by themselves”(1).

He supplied a number of different scenarios regarding brakes malfunctioning, ceasing to work properly, not being correctly adjusted, etc.

However, another July 2012 article indicated that the reason for a truck crash was faulty or ineffective brakes.(2)

Whether this was mechanical or due to “hot brakes” the article does not say. 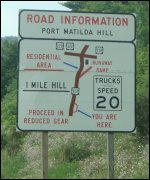 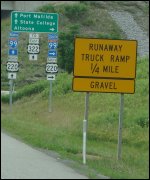 Road sign advising truck drivers of steep grade near Port Matilda Hill, this one saying that there is a gravel runaway truck ramp in 1/4 mile. 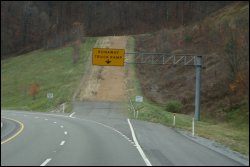 The surface is dirt and gravel, ensuring that the truck will stop.

Road sign advising truck drivers of steep grade near Port Matilda Hill, this one saying that there is a gravel runaway truck ramp in 1/4 mile. 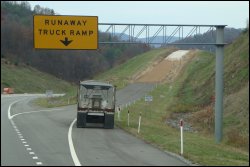 The truck shown is parked on the shoulder, possibly because the driver wanted to cool his truck’s hot brakes. 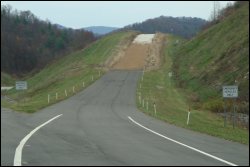 Another runaway truck ramp or escape ramp off steep grade.

Notice how the asphalt has been laid in an upward angle before the dirt and gravel area. 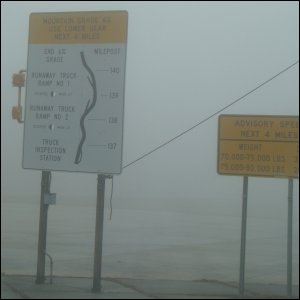 This set of signs advises about a mountain grade of 6 percent with speed advisory based on truck weight.

Notice the weather conditions when this picture was taken: foggy.

Descending a mountain grade in inclement weather can be even more treacherous than when it is clear and dry.

What to Do to Prevent Hot Brakes and Brake Failure

Also, you may want to read through “Air Brake Adjustment” — which explains:

Other Kinds of Truck Brake Problems Besides Hot Brakes

We used to have a video embedded below that showed an “out of control truck” failing to stop at the bottom of a hill, running through an intersection and flopping on its side in July 2012. (It’s a miracle that no cars were coming in either direction at the time.)

The driver claimed that the truck’s brakes stopped working. Although we were not there and have no access to the paperwork resulting from the investigation, it is likely that mechanical failure was not the problem.

It is more likely that the driver didn’t keep his truck under control (used poor technique) and by the time the truck got up to a certain speed, there was no way that he was going to stop it in time for the stop sign by applying brakes.

Although we’ve never seen one, there are stories of out-of-control rigs that have had to hit truck runaway ramps.

One of Mike’s former trucking companies had a policy that said that if one of their trucks ever had to hit a runaway truck ramp because of truck brake problems, the driver involved would automatically lose his job.

The driver who was driving the rig in the out-of-control truck video caused a great deal of financial loss to the company.

Among the things damaged included:

The driver may also have had to kiss his/her professional driving career goodbye.

The FMCSA addresses Air Brake Systems in §571.121, which says, in part: “The purpose of this standard is to insure safe braking performance under normal and emergency conditions.”

Breakaway and emergency braking is covered in § 393.43.

In January 2013, Allen Smith of AskTheTrucker.com wrote an article about Treadle Valve Corrosion that has been mistaken as a brake problem due to truck driver fatigue.

Money saving tip: As the Air Brake Adjustment document linked above says, “one person alone is ultimately responsible to ensure that the brakes are operating properly before the vehicle is moved. That person is the driver.”

The best time to prepare to make a descent down a steep hill, mountain or grade is before you go down. Having hot brakes is a sign that something is wrong.

There are some devices that let drivers know “at a glance” if brakes are out of adjustment.

Although Vicki saw a couple of different kinds of systems at the 2012 Mid America Trucking Show, she does not know how well they perform over time.

Although we think it is a good idea for all professional truck drivers to know how to check and adjust their brakes, be aware that some trucking companies forbid their drivers from adjusting the trucks’ brakes because of the need for certification.

All truck brakes should be adjusted as needed by a qualified mechanic.

Follow your company’s procedure on how to manually adjust your trucks’ brakes before it’s too late.

Do not wind up with hot brakes that result in a smoldering pile of rubbish at the bottom of the hill or over a cliff.

Go See What You Can Scrounge Up

On Parking Too Far Back in Your Tractor Trailer