When we first started trucking, we had a thermoelectric cooler — a device usually used to keep cold foods cold — and a portable toilet in our truck. 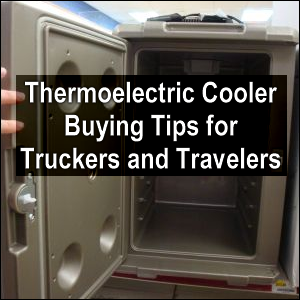 Since we wanted to get as close as we could to having the conveniences of refrigeration and indoor plumbing in our truck, these packing list items were non-negotiable.

Shown here is the view of one of these coolers with its door open.

Motive On Using a Thermoelectric Cooler: To Save Money

We recognized that if we were going to

we must carry some foodstuffs with us to eat in the truck, to avoid the high cost of continually eating out. 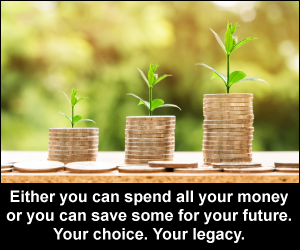 One of Mike’s co-workers told him in October 2010 that he actually spent $150 the week before on meals eaten outside his truck.

We don’t know about you, but to us that’s pretty steep!

What if you could save some or all of that money?

Motive On Using a Thermoelectric Cooler: To Have Perishable Food Choices

We were talking with another of Mike’s co-workers — an owner-operator who had driven his own truck for 32 years — about cooking and eating in our truck.

He said that he did not have a compact refrigerator, thermoelectric cooler or ice chest in his truck.

(He had been given an inverter by his children the previous Christmas but hadn’t yet installed it!)

Astounded because she could not imagine a diet that did not include at least some perishable foods, Vicki asked him what he ate.

Now, if that’s what you like to eat and you’re used to it, more power to you.

But we like a bigger variety of food in our diets.

In fact, we like to eat in the truck at least some of the same foods we would eat if we weren’t living in a truck.

Motives Lead to a Purchase

Our ability to repay our loans and save money hinged on our ability to keep cold the perishable foods we carried with us, including meat, dairy products, fresh fruits and fresh vegetables. 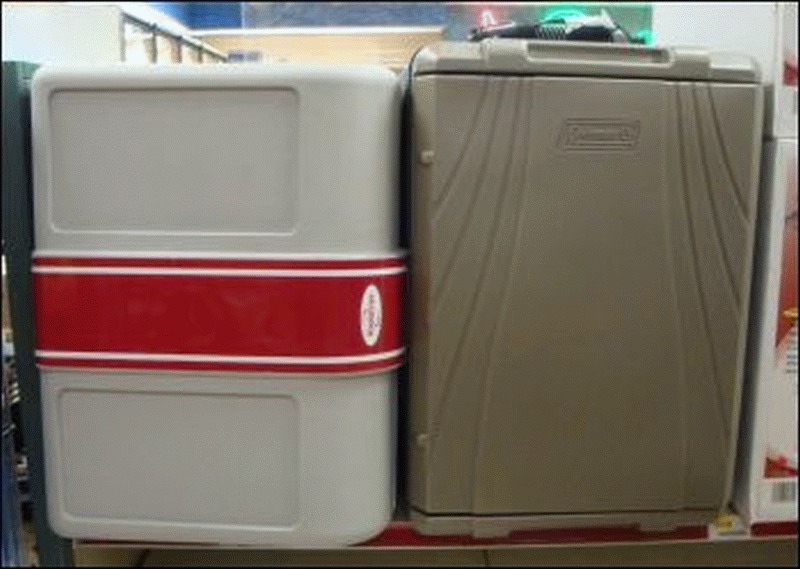 We wanted to think that this 12-volt device would work in-truck similar to how a refrigerator does at home.

We purchased our cooling device at a Wal-Mart.

We seem to recall that the name brand of the unit was Igloo.

We don’t see many thermoelectric coolers manufactured by this company any more.

However, there are similar devices from other manufacturers for sale, particularly in truck stops, like the ones shown here.

Where Should It Be Stored in Your Truck?

The only space for storing a thermoelectric cooler in that truck (since we teamed and the non-driving team member sometimes sat in the passenger seat) was on the floor under the cabinet behind the driver’s seat.

The configuration of the floor storage area is similar to what was pictured for the Freightliner Columbia’s sleeper cab.(1)

So began our adventure… 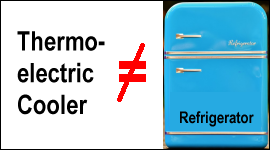 In case you don’t know it, a thermoelectric cooler is not a true refrigerator.

It has no compressor.

It operates on a different technique.

But what if you’re parked, as we once were,

Your truck — unless you’re blessed to have a rig with an APU — will soon warm up to the surrounding temperature.

(Note: back in the early 1990s when we started in trucking, APUs were not commonly available. Even now, many company trucks do not have APUs in them.)

So there we were, sitting in Phoenix (the headquarters for our at-that-time trucking company).

Our thermoelectric cooler did the best it could to keep our cold food cold.

But at 110°F, the coldest the unit could bring the interior temp down to only 70°F.

At this temperature, all of our dairy and meat products spoiled!

In fact, double yuck! because

The U.S. Department of Agriculture’s Food Safety and Inspection Service once stated(2):

… Bacteria grow most rapidly in the range of temperatures between 40° and 140°F, doubling in number in as little as 20 minutes. This range of temperatures is often called the “Danger Zone.” That’s why the Meat and Poultry Hotline advises consumers to never leave food out of refrigeration over 2 hours. If the temperature is above 90°F, food should not be left out more than 1 hour. …

A temperature of 40°F should be maintained in the refrigerator. …

Safe food-handling practices are a good defense against foodborne illness. Because we know how different temperatures affect the growth of bacteria in our food, we can protect ourselves and our families from foodborne illnesses by proper handling, cooking and storing foods at safe temperatures.

For this reason, you can see how storing your food in a device that does not keep a consistently cold temperature could increase the likelihood of improperly stored food causing food borne illness.

Not only did we have problems with food spoiling at temperatures in the “Danger Zone,” but we also had problems with the cooling unit itself.

However, we do remember going through four different units. 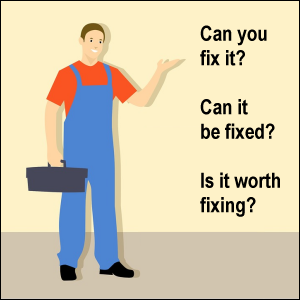 If you go into most major truck stops, you will see a display of thermoelectric devices and perhaps even some replacement parts.

Note: After our fourth unit broke, we decided to try a different method of keeping our cold food cold.

We tried using compact refrigerators but ended up settling on using an ice chest.

If your unit breaks down, you may want to ask yourself 3 questions:
– Can you fix it?
– Can it be fixed?
– Is it worth fixing?

Did the placement of our devices under a truck cabinet have anything to do with their demise?

Either or both of these situations could have made the units burn out prematurely.

But where else could we put the device except on the lower bunk?

The device we bought was designed to stand upright (vertically), not lie on its back (horizontally).

(Some units are designed to lie horizontally, just as our ice chest does.)

Some drivers keep their units strapped in the passenger seat in their trucks.

However, because there were two of us in the truck, that idea did not appeal to us.

Furthermore, we pose the question to drivers who have placed their units in the passenger seat of their trucks:

Does the heat from the sun shining in your windows add an undue burden on the cooling ability of your thermoelectric cooler?

In general, we have found most 12-volt products to be of inferior quality when compared to their 120-volt counterparts (the types of appliances used in homes).

While there may be some 120-volt thermoelectric units available, we have never found them in truck stops.

Some folks have had great success with their thermoelectric coolers.

As for us, we will never again use one because we have found them to be unreliable.

For what it’s worth, some of these units may be able to cool or warm, depending on the direction that the cord is put into the outlet on the unit.

Also, these units may be called food warmers or food coolers rather than by the thermoelectric name. 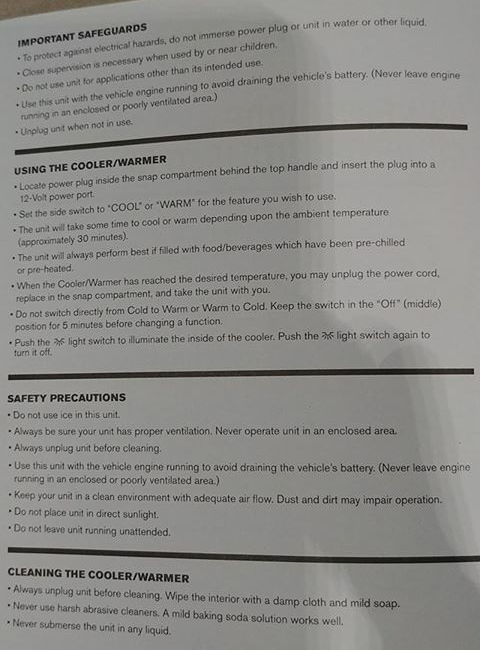 Thanks to a friend on Facebook, we were able to obtain a photo of a page from a thermoelectric cooler’s owner’s manual. shown here.

We will condense some of the points that we found extremely valuable to know:

Although it is not the same product, we were able to find the owner’s manual for another thermoelectric cooler online.

We verified some of the points listed above in it.

A website for another model of cooler at one time stated,

Is there any time limitation on running the cooler on the AC adapter while in the house, office or dormitory?
koolatron.com/CA/en/frequently-asked-questions (no longer online)

These units are designed to run 24/7. Make sure there is good air circulation to the cooler vents and for the adapter. This will assure long life for both.

If a part can break on one of these coolers, the continual movement of a truck is likely to help it break.

What parts are most likely to give out?

Vicki walked around in the travel stores of some chain truck stops.

Here’s what she found…

Parts for a Koolatron unit, what appear to be motors, on sale at a truckstop. 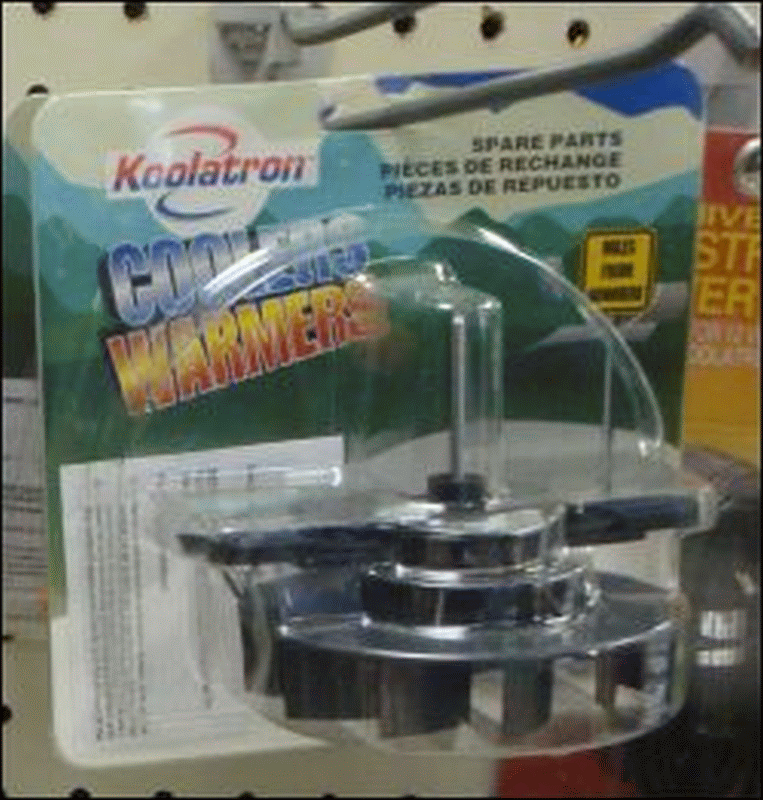 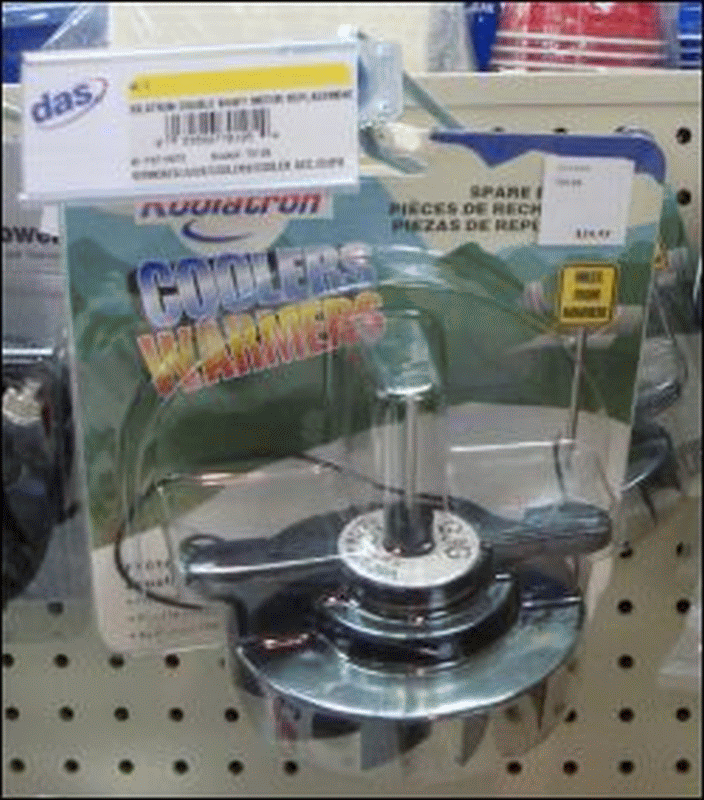 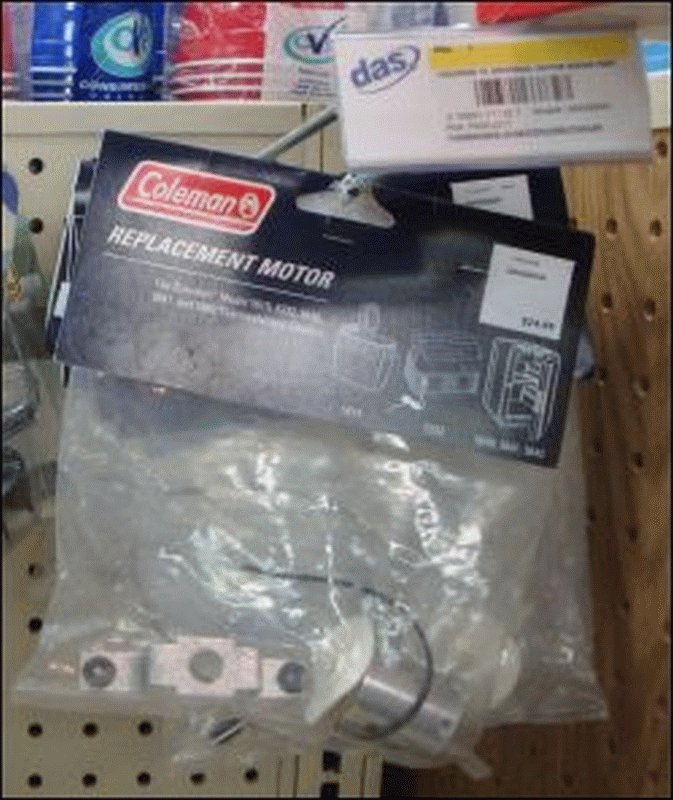 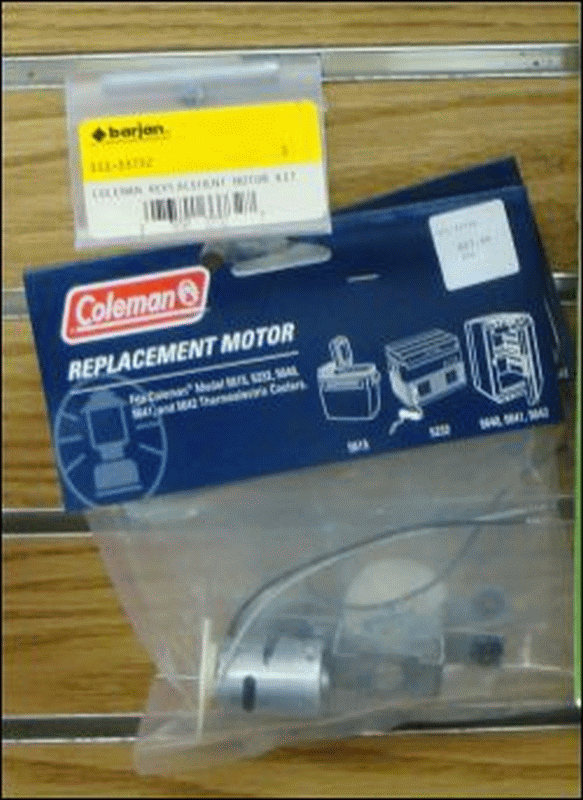 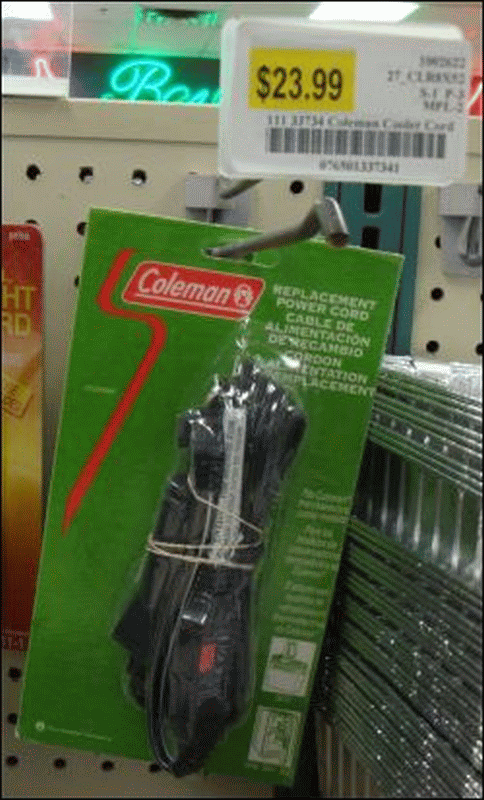 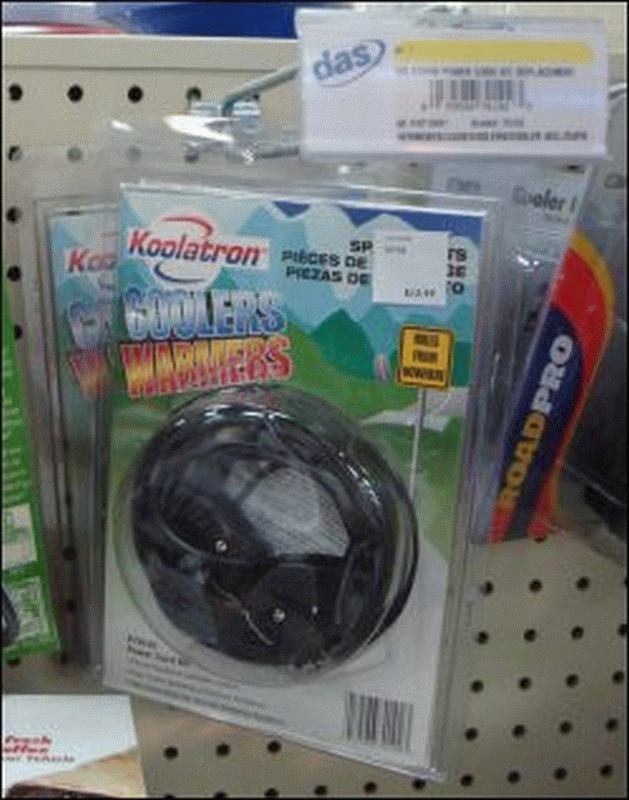 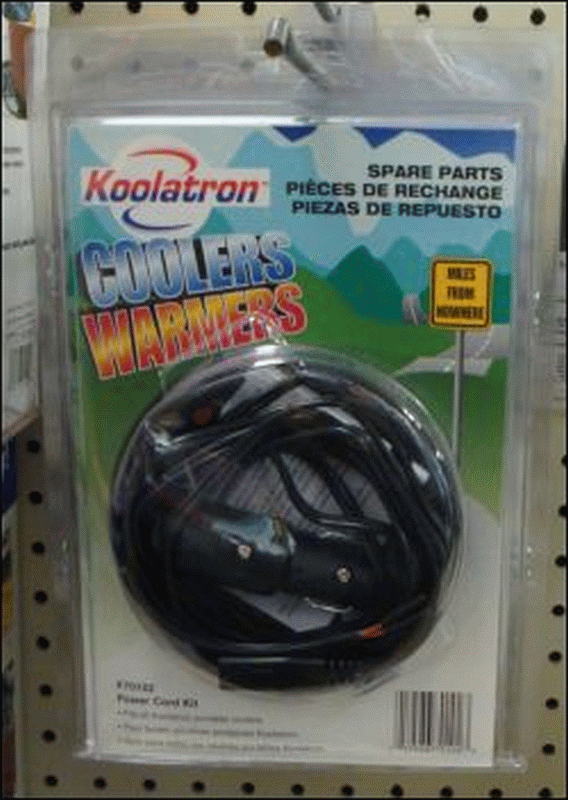 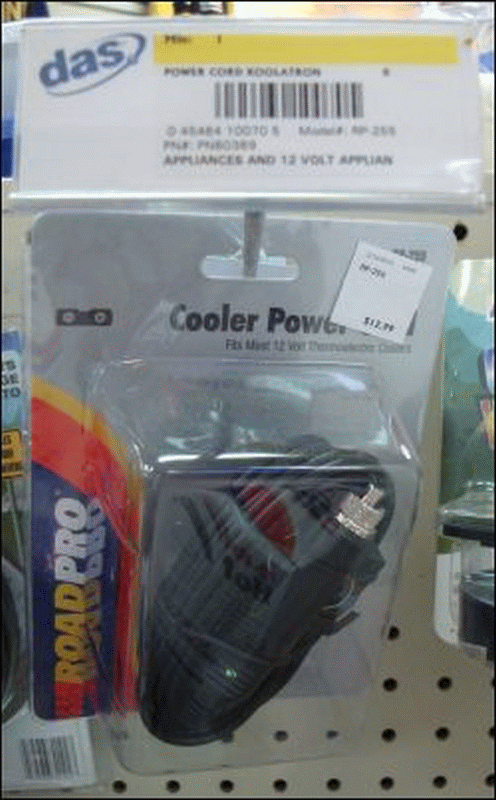 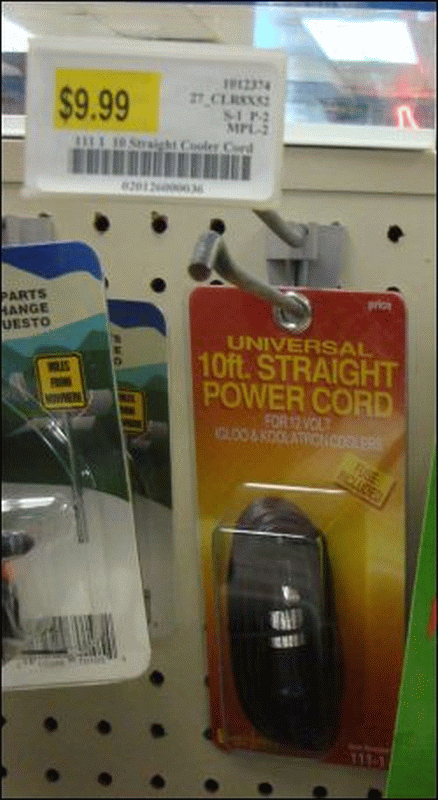 As you can see in some of the pictures, these replacement parts are not cheap.

But then again, here’s an interesting observation:

Since when did you see replacement parts for a refrigerator being sold near refrigerators?

They’re built to last much longer.

Of course, this appliance longevity is based upon non-moving usage.

One website detailed a couple who had a fridge (with one replacement part) that lasted for 50 years!(3)

So, why don’t thermoelectric coolers last that long?

In a nutshell, they’re not meant to.

They have planned obsolescence.

And that’s something you need to bear in mind regarding thermoelectric coolers.

Consider the lifespan not only of the unit itself but also of the replacement parts.

Will the actual lifespan be far shorter than the expected lifespan as depicted in the image here?

Now if your cooler has given good, long service, perhaps we should have asked,

“Why didn’t our coolers last that long?”

We would be very interested in knowing the average lifespan of thermoelectric devices for all professional drivers on the road over the years.

And speaking of appliance lifespan, make sure before you buy one that you look at its warranty.

If a product is worth its salt (so to speak), it should have a minimum of a one year warranty.

Money saving tip: If you decide to buy a thermoelectric cooler, shop around for the best price based on features.

Truck stops tend to sell them (and replacement parts) at a premium price.

You may be able to find units less expensively through discount or department stores.

Of course, when you buy anything online, you need to factor in shipping as part of your overall costs.

You may wish to compare these features:

Furthermore, you would be well advised to have a stash of non-perishable foodstuffs in your truck in case your unit bites the dust and all of your perishable food spoils.

Without a back-up food supply, you’ll most likely be stuck with having to buy either restaurant meals or overpriced foodstuffs from a truckstop travel store.

You may want to use as the basis for comparison shopping the table we designed to help you compare compact refrigerators, available through our Free Downloads page.

The parameters may not be the same, but it may give you an idea of how to evaluate units.

Consider also that a thermoelectric cooler is not a freezer and is not designed to keep ice frozen.

For those of us who like ice in our drinks, you’ll have to arrange for a different ice storage device — like an ice chest.

Hotel Truck Parking: Not Every ‘Truckers Welcome’ Site Does

On Driving in Wind — Strong Winds — in a High Profile Truck