When Mike had a certain local truck driving job, he was required to check tread depth on all the tires on the company-owned truck assigned to him every Tuesday. 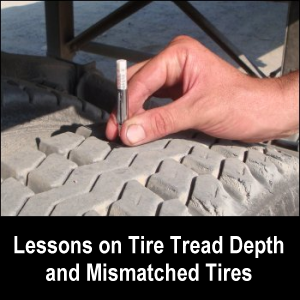 He measured the inside, center and outside of the tire with a gauge that shows the amount of depth left on the tread in 32nds of an inch.

He documented all the numbers for each tire and submitted his report like clockwork.

When Tread Depth Is Too Low

Some time back, one of the tires (which admittedly had a lot of wear on it) needed to be replaced.

Mike’s boss asked the Director of Operations about replacing the tire next to it at the same time.

Not long after that, Mr. Operations was looking at the tread depth reports and started to get agitated about the wear on one of the tires on the truck.

How could that much tread be coming off one tire?

Well, we put two and two together and figured out what was happening.

The premature wear on the new tire (yes, it was the new one) was a direct result of the tires being mismatched.

The new tire had more tread on it and was compensating for the old one.

Here’s an illustration (not drawn to scale) to show you what was goes on with tires that have been mismatched with respect to tread depth.

Forcing a Heavier Burden on One Tire

Since the axles are supposed to be level, it is possible that a mismatched tire with the lesser depth of tread may barely touch the ground, causing the tire with deeper tread to carry the burden that should be shared by both. 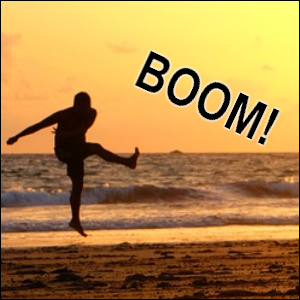 (A simple math lesson involving radius, diameter and circumference is all that is needed to understand the problem of premature wear on a tire with more tread.)

By not having both paired tires replaced simultaneously, Mr. Operations indirectly caused a perfectly good “new” tire (even if it was a retread) to wear down prematurely.

The tread left on the old tire was so shallow that it was only 1/32″ away from having to be replaced legally anyway, so there was no reason not to replace it along with the other one.

In this case, not spending the money to replace both tires at the same time came back to bite the company financially.

A Difference in Terminology

When we drove for Swift back in the 1990s, one of the terminals had mechanics who (for reasons we never understood) loved to swap tires on trailers.

One day after finishing our tasks, one of the mechanics told us to bring the trailer into the shop to swap out a pair of tires because they were “mismatched.”

We didn’t really want to be hung up at the terminal until another pair of tires was put on the trailer, but if they were truly mismatched, we knew we’d have to wait.

We went back to look at the tires he indicated.

They had the same amount of tread depth on them, so we scratched our heads in wonder.

That’s obviously not what we mean on this page.

In this picture of a display of tires in front of a truck stop, you will see that there are steer tires, drive tires and trailer tires.

Each of the non-steer tires has a different configuration or tread pattern. 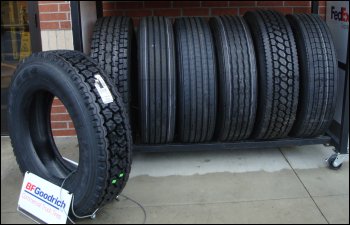 Measuring tread depth is not hard with the right tool.

While using a U.S. coin may let you know if you have the minimum tread depth, it does not give you an accurate reading as can a tread depth gauge.

There are different kinds of gauges:

If you get a combination unit, make sure that the tire pressure part is able to handle the air pressure of truck tires (higher pressure than an automobile).

The gauge doesn’t have to be expensive, just reliable.

One such tread depth gauge is listed here from Amazon.com, with which we have an affiliate relationship.

The gauge that Mike used for years measures in both millimeters (mm) (metric) and 32nds of an inch (in) (English) units. 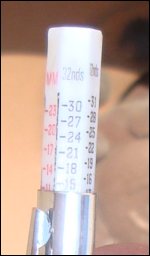 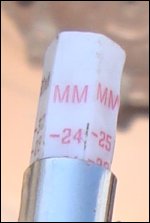 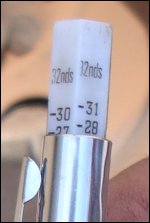 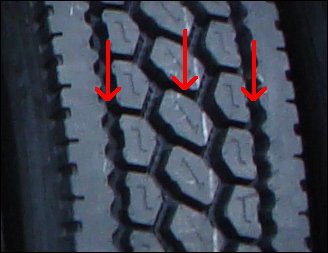 Always check the tread in three places: inside, center and outside.

If you find that the inside and outside vary much, you may have an alignment problem. 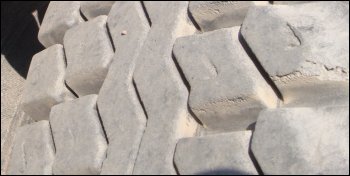 The tread pattern may require that you average two center numbers. 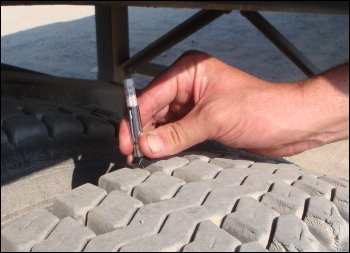 Measuring tread on the inside of the tire. 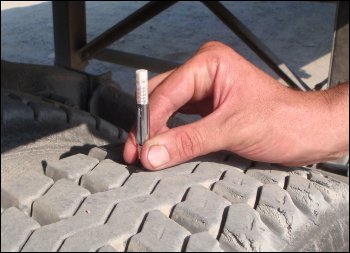 Measuring tread on “inside center.” 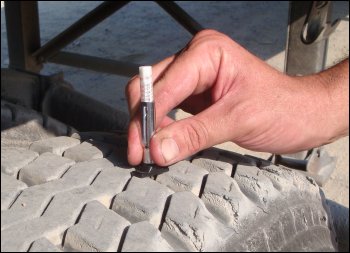 Measuring tread on “outside center.” 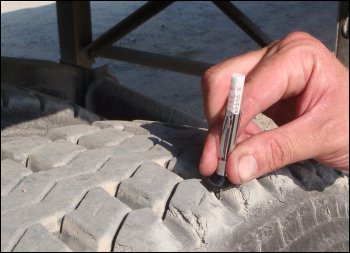 Measuring tread on the outside of the tire.

Each tire on an 18-wheel tractor has a position.

In your mind, turn the rig 90 degrees counter clockwise and look at it from overhead.

Here would be the tire configuration.

Do you see the pairs of tires on the tractor and trailer? They are:

For your convenience, we have designed a Tread Depth and Tire Pressure Documentation Table (that you can download for free from our Free Downloads page) that allows you to keep your records neat and tidy.

Of course, it is not advisable to let your tire depth get that low.

One never knows if he/she will be driving through rain or snow where having a good grip on the road is essential.

Also, one never knows when he/she will be pulled over for a random but full-fledged DOT inspection.

Mike reported that a new recap on a trailer tire he once had replaced had 25/32nds of tread on it.

Your job as a professional driver is to monitor your tires for proper depth of tread and tire pressure.

If you have a tire with tread that’s too shallow, it needs to be replaced.

If tire pressure is low, you may have a leak from a nail or screw you picked up anywhere along your route.

Sometimes tires can be patched and sometimes they can’t. 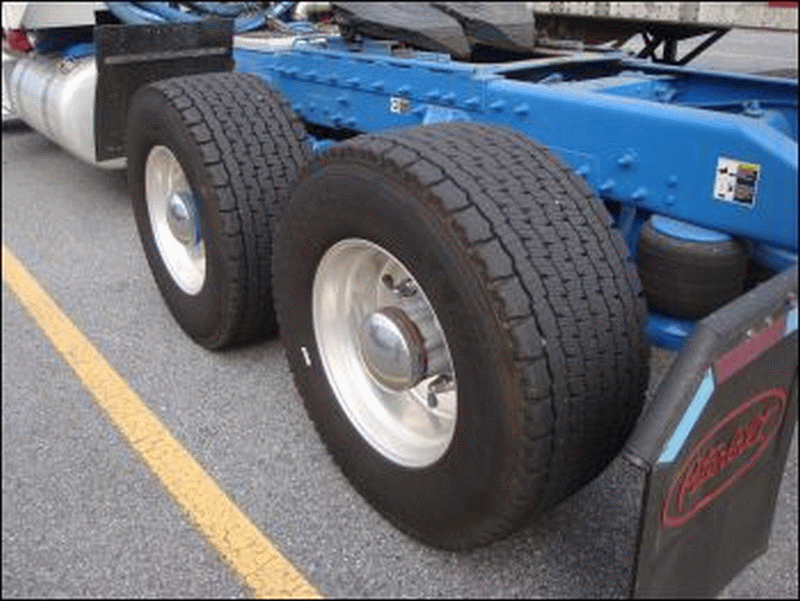 Obviously, a driver whose truck (tractor, trailer or both) has “super single” tires needs to monitor tread depth and tire pressure, too.

However, since a “super single” replaces a pair of tires, it may be even more critical to watch for problems since there are half as many sidewalls as on a pair of tires.

The information on this page has been primarily directed for professional truck drivers in the USA.

Measuring depth of tread and keeping a certain tread depth on your tires may vary based on your location.

After reading this page, a reader asked us a question.

In our response, we also asked some questions.

We have published a guest post, Tread Depth 2, that answers them.

On January 9, 2020, we received this feedback from owner-operator Robert Bonnewell:

My experience with mismatched tire tread heights is that that the “shorter” tread depth tire wears the most because it is always “skidding” along instead of rolling. the smaller circumference means it has to turn 1.xx turns to cover the same distance as the larger one, but is held back by the axle therefore it is always skidding and burning rubber with every rotation!

Thanks for your feedback, Robert!

Money saving tip: Don’t think that you can “save money” by replacing only one tire in a pair, when the two tires have significantly different tread depths.

The “new” tire with deeper tread will most likely wear down prematurely, causing you to have to replace it more quickly.

Even though it is more expensive to replace both simultaneously, especially when they are close to needing to be replaced anyway, they will wear at the same rate.

Many truck drivers do a visual inspection of the depth of their tire tread when they check their tires with a “tire thumper.”

This may or may not be adequate, depending on your company’s requirements.

If you are an owner-operator, measuring the depth may be more important to you because you’re paying for the tires.

Watch for other problems associated with uneven wear on a tire tread, which may be an indication of a problem.

For example, a tire that wears more on one side than another may be a sign that your truck has an alignment problem.

Replacing the tire in this case will not solve the problem.

The truck must first be realigned.

Another indication that there is an alignment problem is if your tractor “pulls” to the left or right.

We recommend that you measure tread depth at least once a week if not more often.

Load Locks: Their Purpose and Limitations