When you’re driving at certain times of the day, having an extendable visor to block the sun — to shield it from your eyes — can more than pay for itself. 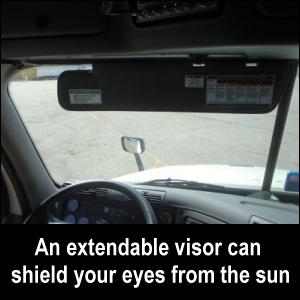 In this illustration (from an overhead perspective), we show the sun’s rays streaming through the windshield (or from the front of the truck) right at the driver’s eyes.

This situation could take place

In this illustration (again, from an overhead perspective), we show the sun’s rays streaming through the driver’s side window (or from the driver’s left).

This situation could take place

In any (or all) of these situations — at just the right angle — the light can shine in or toward the driver’s eyes past a visor — that is, unless it is extendable.

The following two photos, taken from inside the Freightliner Cascadia truck that Mike drives for his trucking company.

They show the driver’s side visor first in its “normal” position and then in its “extended” position toward the middle of the windshield (the partition). 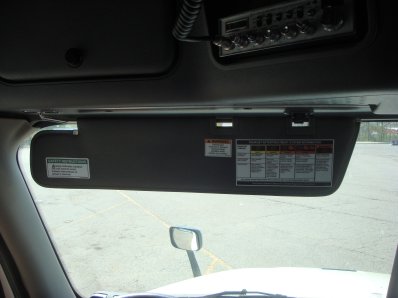 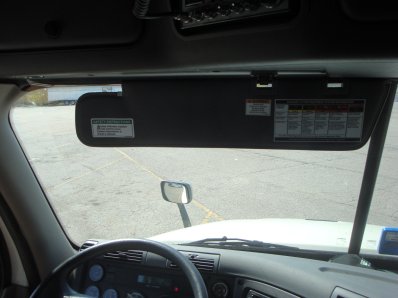 The extended position (toward the center of the windshield)

The visor can also be pulled around to the left in either normal or extended positions.

These next two photos show the passenger’s side visor first in its “normal” position and then in its “extended” position toward the middle of the windshield. 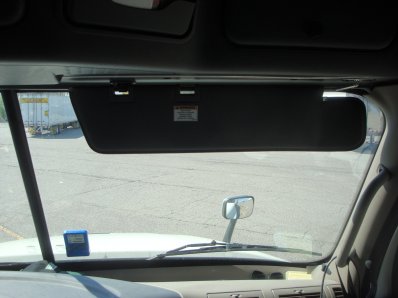 The “normal” or non-extended position 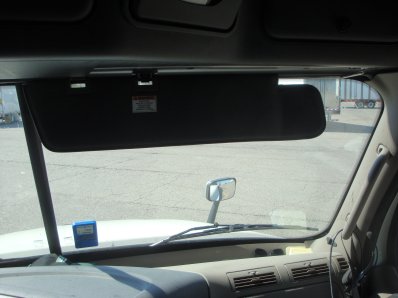 The extended position (toward the center of the windshield)

Although the visor could be pulled around to the passenger’s right, we have never needed to do this.

If the sun was pouring through the passenger window, Vicki preferred to put on her hat to block the rays. 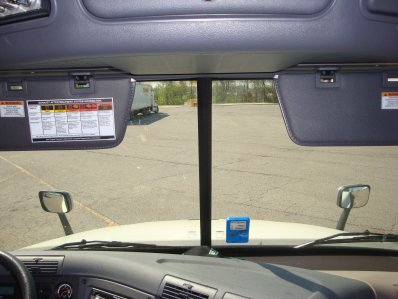 Both visors in their “normal” positions 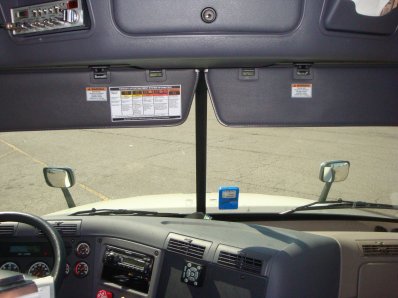 Can you see how much extra windshield space is covered by the extension?

Visor or Hat to Block the Sun?

Earlier, we raised the issue of blocking the sun’s rays via the brim of a hat.

It could be dangerous for a driver to angle a hat’s brim to block the sun coming from his or her left, because the brim’s position might cause the driver to be less likely to look out the left window and at the left mirror.

One could argue that using a visor could also block a driver’s ability to look out the left window, but the built-in visor lowers only so far whereas a hat can be adjusted much lower.

Extrapolating the argument from the previous section, it is possible that professional drivers can install an additional visor in their trucks, blocking the sun’s rays at even deeper angles than the installed visors can.

For the sake of argument, let’s clarify that theoretically there can be both horizontally and vertically installed clip-on visors.

A horizontal visor would have the same effect as an extendable one whereas a vertical visor would clip onto the bottom of a built-in visor.

We have never seen any visors for sale in a truck stop.

Beware of using any truck accessory that could hinder your ability to do your job as a professional truck driver.

It would be interesting to know if Freightliner (or any other truck manufacturer) sells extendable visors as after-market truck parts for installation in trucks that do not have them.

We have found that using a built-in extendable visor is very advantageous during times when the sun is right “there” shining in the truck at an angle which a regular visor cannot block.

Of course, there may be times when no matter what, you can’t block the sun’s rays from coming in.

For times like that, perhaps it is best to use a good pair of sunglasses with polarized lenses.

Money saving tip: From a money saving standpoint, an extendable visor can help shield the sun from your eyes while you’re driving such that the rays would distract you or blind you.

As you know, distracted driving is one of the leading precipitators of accidents.

Eliminating a cause of distracted driving is a very good thing.

We don’t know how many accidents have been caused by truck drivers who had the sun in their eyes, but even one is too many.

Return from An Extendable Visor in a Truck Can Shield the Sun from Your Eyes to our Truck Parts page or our Truck Drivers Money Saving Tips home page.

Abandon a Truck? Abandon Your Future in Trucking!

Tricks of the Trade and Truckers’ Money Saving Trade Secrets