How many times have you been at a fuel pump at a truck stop, trying to fill up tanks on both sides of your truck? 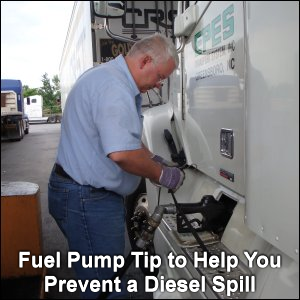 You can’t be in two places at once, so you angle the nozzle into the opening of the fuel tank on one side of your truck and go attend to the other.

You trust that the unattended nozzle will stay in the opening.

But what if there is a surge (like when the pump on the other side clicks off)?

Or if the nozzle hasn’t been placed as far down into the fuel tank opening as it should be?

That nozzle can pop right out, land on the ground and spill diesel all over the place. Vicki has seen it happen.

The poor driver was greatly embarrassed.

There was no spill kit around in the middle of the night, so the driver just finished fueling and left. If only that driver had known a simple and inexpensive trick.

Note: This incident happened many years ago and we do not recommend that a driver who has a fuel spill ever leaves it. If it happens at a truck stop, at the very least, report the spill to someone on duty. For what it’s worth, our fuel island review form includes the question, “On a scale of 5 (high) to 1 (low), was the fuel island area of your bay clean, devoid of fuel, oil and trash on the ground?” So we’re sensitive to this. 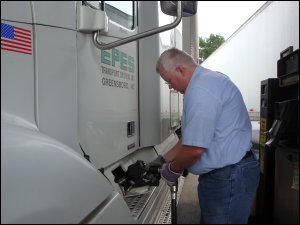 OK, back to the tip…

In this photo, Mike is manually pumping fuel into the tank on the driver side of his truck.

This particular model of truck is a Freightliner Columbia.

Notice that the location of the opening to the fuel tank is behind the top step. 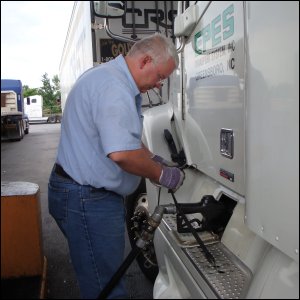 In this photo, Mike is stretching a rubber tie down over the nozzle from a fuel pump to keep it in the opening of his fuel tank.

The rubber tie down is hooked on each end through a hole on the top step. (The construction of the step is very good for draining off water.)

Mike would use one rubber tie down on each side of his truck.

He did not keep the tie downs on the truck’s steps, but manually placed them each time he got fuel.

Between fuelings, he stored the tie downs in the side box on the driver’s side of his truck along with the tools he used during fueling.

This view from the top shows a rubber tie down strapped over the top of the nozzle at a fuel pump, hooked through holes on the top step. 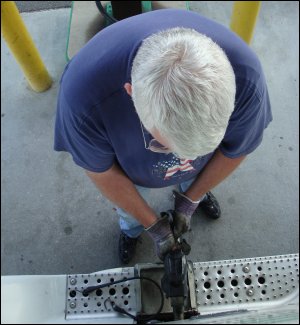 This view from the top shows Mike putting diesel from a fuel pump into his truck.

See how the rubber tie down that he had put over the nozzle has been released to let him manually control the flow toward the end of the fueling process.

This side view of the body of a Freightliner Cascadia shows that the fuel tank opening is away from the step.

There is no where to place a rubber tie down. 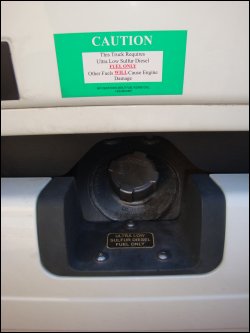 However, the opening to a fuel tank on a Freightliner Cascadia has been placed in such a way that Mike found he could sort of wedge the nozzle under the upper lip of the truck body.

Mike did not care for this particular redesign of the truck’s body with regard to the fuel tank opening, but he never had a problem with a fuel pump nozzle popping out of it either.

Most of our truck driving experience has been with companies that used Freightliners. So we are not familiar with the set-ups of other makes of trucks.

If you drive any of the following, we would be interested to know how you keep the nozzles from the fuel pump in the opening to your truck’s fuel tanks: 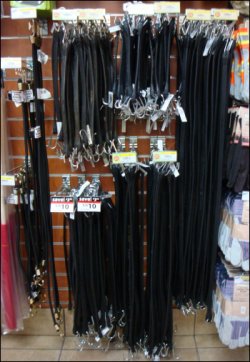 Some people will say that there is a significant difference between stretch cords and rubber tie downs.

You can usually find both at major truck stops, displays of the rubber tie-downs of which are pictured here.

Another name for these devices is a bungee cord. 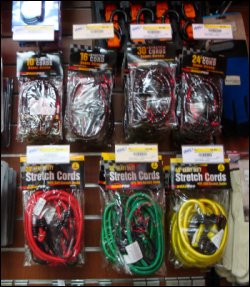 While stretch cords and rubber tie downs both work they same way, most stretch cords we’ve seen have a covering that can be soiled and do not have a detachable metal hook.

You will want to use the product that best meets your needs.

Money saving tip: Rubber tie downs come in handy for a number of applications in trucking.

They also come in various lengths.

To get the best fit for your truck for tying down a fuel nozzle, simply measure the distance on your truck’s steps where you want them to hook.

Bear in mind that the tie down will stretch, so you may want to get one that is slightly shorter than the distance you measure.

Also, if you drive team and you’re right at a shift change, both of you can monitor the fuel delivery into the truck, one of you on each side.

Return from Fuel Pump Tip to Help You Prevent a Diesel Spill to our Tricks of the Trade page or our Truck Drivers Money Saving Tips home page.

Out of Service Truck: Trucker Stages a Showdown

On GPS for Truckers: When GPS Routing Leads to Truck Accidents