Keith Lucas of NighthawkLights.com contacted us about reviewing a Nighthawk Ultralight.(1)

It used to be used in two ways:

Professional truck driver Mike Simons reviewed the Nighthawk light in the course of his work, particularly when he was doing pre-trip inspections on his rig. Prior to this time, he had been using the light from his Smartphone as a flashlight.

The following, including photos, is his review. (Vicki had a bit of input as well.)

Of course, the issue with using a flashlight (even a small flashlight) or a Smartphone light is that you have to hold it in your hand, clamp it in your teeth, stuff it under your arm or somehow affix it awkwardly to your body at the right angle in order to see by its light.

Not so with the Nighthawk unit. Being a hands-free light — with the very small unit being either on the back of one’s finger or on the bill of a trucker hat — this freed up Mike’s hands to do his work.

Mike says that there are parts of your rig that you need to touch when you’re doing an inspection — as opposed to just looking at them — and this unit frees up both hands for that purpose.

Vicki asked Keith about replacing the battery and light bulb. Yes, there is a way to change those, but it probably won’t ever need doing because the high-intensity light bulb is rated to last an amazing 50,000+ hours. The unit comes with two 1.5 volt batteries.

According to the site, the device has a “High intensity 29 Lumen Ultra Bright LED light.” Mike really liked the size and intensity of the light stream that comes from this unit.

This unit is also perfect for reading in the dark, whether for business or pleasure. Although the quality of interior lights in some trucks has improved over time, it can still be a bit challenging to read fine map details (especially if the “map light” is red). We could easily envision drivers using the Nighthawk Ultralight for reading their trucker’s atlas after dark.

Also, there are bound to be some professional drivers who love to read. Vicki has always enjoyed reading right before bedtime. This high-intensity light provides more than enough light to read by, but not so much that it would keep Mike awake. We can envision a book lover somehow mounting it onto something to shine down onto the pages without it having to be on a trucker hat.

One of the beauties of the product is how small and lightweight it is. It is just 1.5 inches long and weighs only 1/2 ounce. It can easily fit into a pocket (something you can’t easily do with many battery-operated flashlights).

To put this in perspective, some truckers may remember many years ago when industrial plants were run by computers that took up an entire room. Now the same operations can be handled on a much smaller console or even a laptop computer if necessary. That’s a bit what it is like going from a bulky, many-batteries-to-operate flashlight to the Nighthawk Ultralight.

Of course, being so small, the unit is apt to get “lost” in the truck. (“Where did I put that thing?”)

Having a local truck driving job, Mike carries most of his stuff with him from home to work and back again every day. He does have a place to put the Nighthawk Ultralight in his truck. When he carries the unit — made of all black high impact material — in the bottom of his bag, it can be a little difficult to see.

Mike has a suggestion to assist with that: make the Velcro® strap a different color (for contrast). Vicki wonders if there is a way to make the strap “glow in the dark.” Perhaps a compromise would be to wrap a strip of glow in the dark tape on the outside of the unit.

Mike notes with pleasure that the slider switch, while not difficult to turn on, must be deliberately turned on. One cannot accidentally turn it on unless it gets wedged in somewhere.

Also, unlike a “button” that is likely to wear out when depressed over and over again, the slider appears to be made of the same high impact material as the body of the unit. 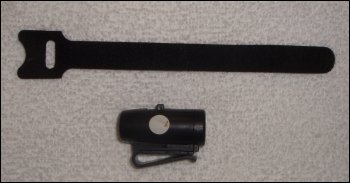 The Nighthawk Ultralight shown here is separated from its loop and hook finger strap.

The end of the strap fits
– through the unit’s enclosed hole (not the space where the cap’s bill fits),
– then through the hole on the strap, and
– then back around on itself to provide a secure method of attaching itself to a finger.

The strap is totally adjustable and appears to be long enough to fit around many work gloves. 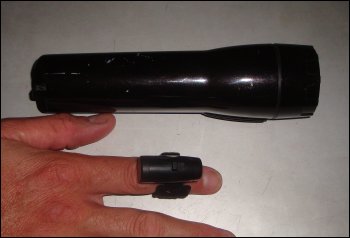 We compare the size of our standard 2-D-cell-powered flashlight and the Nighthawk light affixed to Mike’s right index finger with the loop and hook strap. 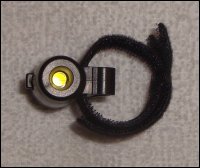 The “light” end of the Nighthawk light with the loop and hook strap through the unit and then curled around on itself as described above. In this position, it is ready to be put on Mike’s finger. 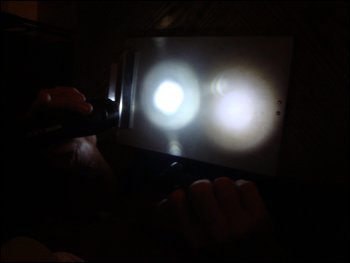 Mike is shining our 5 LED flashlight and the 1 LED Nighthawk Ultralight on the top of his aluminum forms holder to give a comparison of the amount of light given by the latter.

But let’s look at the illumination the latter gives.

The next 3 photos were taken in semi-darkness. 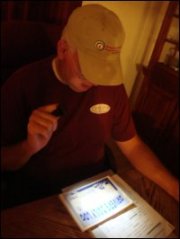 Mike is shining the Ultralight — affixed to his right index finger — onto his log book. 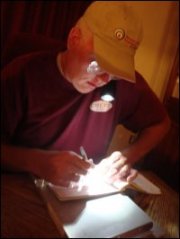 Mike has our 5 LED flashlight clamped in the crook of his neck between his left shoulder and jawline, to shine on his log book.

See the angle of his left arm in this photo compared with the next one. 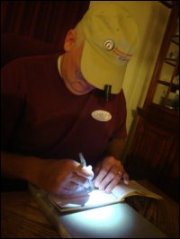 The Ultralight on the bill of Mike’s cap is shining on his paperwork.

This hands-free and “no-cramp” position allows him work on his log book with both hands.

The Nighthawk light on the edge of a ball cap with the loop and hook strap still in place.

With the strap in place, it can’t slide all the way back on the cap.

The Nighthawk Ultralight without its loop and hook strap in place, pushed all the way back on the bill of the cap.

The underside of the bill cap with the Nighthawk light pushed all the way on. 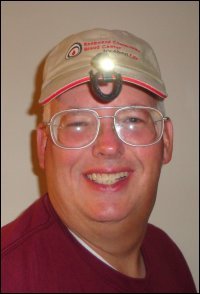 Mike Simons is wearing a Nighthawk Ultralight on his cap with the light turned on.

The loop and hook strap are in place because that’s the way he uses the unit most of the time. 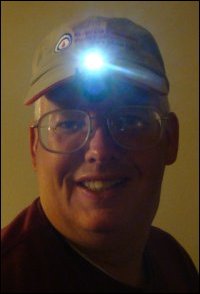 In the semi-darkness, you can see how bright the light is coming from the Nighthawk Ultralight that Mike Simons is wearing on his cap.

Can you tell from his smile that he really likes this product?

Mike was very impressed with the size, amount of light and performance of the Nighthawk Ultralight and would strongly recommend it to other professional truck drivers.

Although its size is small enough such that one might be tempted to spell it “Nighthawk Ultralite” its performance is anything but small or “lite.”

In addition to using this device for doing pre-trip inspections and reading maps in less than full light, it can also come in handy as part of one’s personal self defense arsenal when walking anywhere from dusk to dawn.

Imagine having a hands-free high-intensity flashlight with you in dark docks, when walking through poorly lit truck stops, and even when you’re broken down on the side of the road at night.

(Ever try digging through your side box for reflective triangles on the side of a road when it’s pitch black outside?)

We recall keenly the experience we had as newbie truck drivers the first and only time we ever put snow chains on a truck. It was dark, snowing and cold — and the batteries in our flashlight died!

It would have been so nice to have had a Nighthawk light back then.

In our opinion, every trucker should have one of these for both every day and emergency situations.

Consider tucking one — or one like it — in your emergency kit and getting one for your home support team. You’ll be glad you did.

Return from Nighthawk Ultralight: A Review by a Professional Truck Driver to our Product Reviews page or our Truck Drivers Money Saving Tips home page.

1. NightHawkLights.com is no longer online.