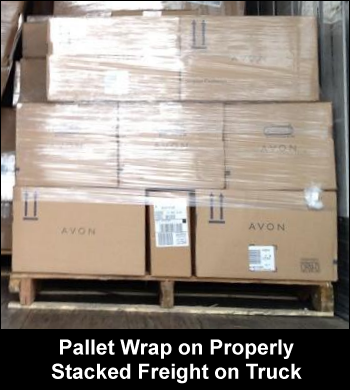 Many dry van truckers are familiar with pallet wrap, the stretch wrap that goes around pieces of freight loaded on a pallet so that they won’t fall off in transit.

As we will show on this page, this plastic wrap does not always work to keep palletized freight on the pallet.

Nor does it prevent improperly stacked freight from leaning over.

In August 2010, Mike picked up a pre-loaded trailer to take to a receiver’s location first thing the next morning.

It took quite a while for Mike to get assigned to one of the few docks there.

Just before finishing backing the trailer into the dock, everything looked fine with the load from the rear with the doors open.

However, during the unloading process, the receiver told Mike that he needed to pull out of the dock and restack the pallets from which product had leaned over or actually fallen.

Since Vicki was riding with him at the time, she knows that he hadn’t done anything to the rig to cause the load to shift.

The product that had been loaded on pallets and wrapped with pallet wrap on that particular load was boxes of canned beer.

It’s a good thing that the boxes didn’t contain glass bottles of beer.

If the containers had been glass bottles, they might have broken and resulted in a lot of broken glass.

Still, it was Mike’s responsibility as the driver to go into the back of the trailer on that hot August day in the southeastern USA and painstakingly re-stack the product — pallet by pallet.

He said that there were 7 pallets stacked 14 high. Of all the pallets in the truck, only about 2 or 3 were OK. 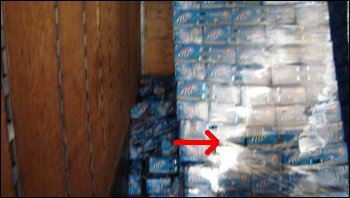 The pallet wrap on the vertical stack on the right has begun to tear in the area near the red arrow.

The product on that pallet is leaning toward the nose of the trailer.

The product to the left — along the wall and nose of the trailer — had fallen on the floor. 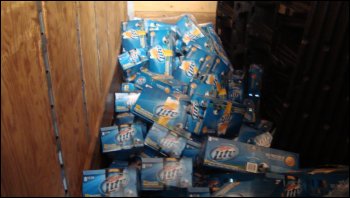 This is a close-up of the boxes of beer that had fallen on the trailer’s floor after having at one time been “secured” by pallet wrap.

The black thing along the right side is the bulkhead. 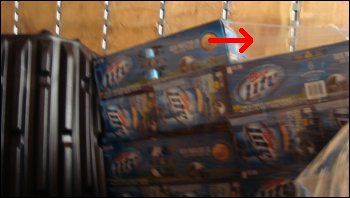 This stack of boxes of beer has begun to lean.

The bulkhead kept the freight from falling over completely.

Still, the pallet wrap (indicated by the red arrow) was unable to keep the palletized freight from shifting. 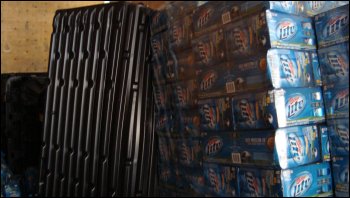 The product on this pallet is leaning against the bulkhead near the front of the trailer. 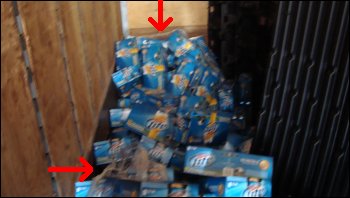 The product lying in the left front corner of the trailer’s floorboard clearly came out of its pallet wrap, as shown by the two red arrows. 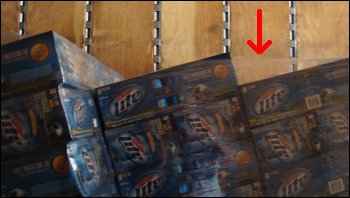 This photo shows the degree of lean experienced by the stacks of product, when compared with the vertical lines along the trailer’s wall.

Evidence of Driver Slamming on Brakes?

On our Avoiding Overweight Fines page, we described a situation in which we picked up a load of beer from the Swift terminal in Eden, North Carolina (near a beer manufacturing plant).

Ridiculously, the nearest CAT scale to the location at that time was at the TA in Troutville, Virginia (over 80 miles away, over one of the hilliest and curviest truck route roads on the USA’s east coast, U.S. 220).

We noticed when we picked up the load that the trailer was leaning to the right.

But we had been told in orientation to never break a seal. So we took the load as-is.

Mike was never able to scale the load legally at the truck stop because it had been loaded incorrectly.

See the images on that page to understand what we saw when we opened the trailer doors.

Had it been true that Mike had slammed on the brakes between the terminal and the truck stop, he would have seen leaning and fallen freight like that shown on this page.

Observe in this next photo that two stacks of product on pallets have started to lean toward the nose of the trailer.

Also, notice that the left stack is not only leaning forward but also to the left. Mike said that that is because the bulkheads were not centered on the load. Nor were the pallets. 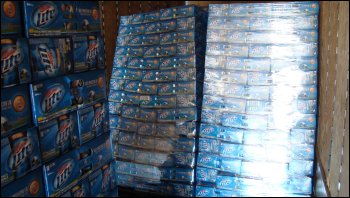 This is evidence that at least one driver who hauled that trailer must have braked hard enough to cause some shifting.

What to Do When the Product Leans or Falls 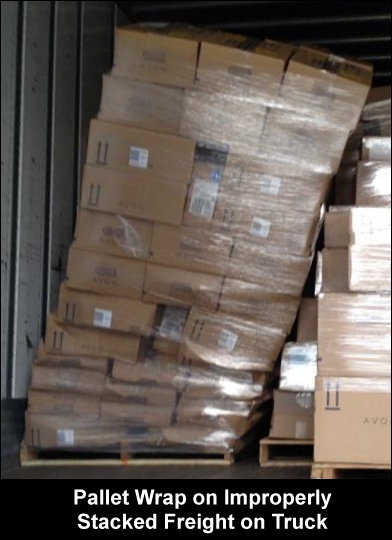 Obviously, the stack is too high and the weight of the freight at the top of the stack caused the boxes at the bottom of the stack to collapse or be crushed.

The first thing to do when one discovers that freight has leaned or fallen in one’s trailer is to advise one’s driver manager.

Inform him or her that the product needs to be placed back on the pallets.

If there are no lumpers at that facility, it will most likely be the driver’s responsibility to restack the freight.

The driver should request additional pay for his or her trouble.

Keep track of how long it takes you to do this work and report it.

While you are doing the manual labor, you need to take precautions regarding your body.

Under no circumstances should you let yourself get too hot.

Make sure that you stay hydrated with water (not carbonated beverages or energy drinks).

We strongly recommend that you take photos to document the damage, starting from before you touch anything until you finish.

Refusal to Pay for the Problems Caused by Others?

What happened to the driver (assuming there was only one) who had this load before Mike got it?

Was he ever charged with slamming on his brakes and causing the load inside the trailer to shift?

We speculate that the time may come when trucking companies may refuse to pay money out of their own pockets to Driver #2 for the problems caused by Driver #1.

How will they know?

At the 2013 Mid-America Trucking Show, Vicki talked for a while with a vendor whose instrumentation calculates numerous things in a truck, one of which is “Vehicle Dynamics” (acceleration, braking, etc.).

We would not be surprised if more and more fleets in the USA started to install technology to measure this very thing, to protect themselves.

What if Freight is Actually Damaged?

If freight that has leaned or fallen inside your trailer has actually been damaged, you may have to submit an “OSD” or “OS&D” report.

(The letters OS&D stand for “Overage, Shortage and Damage”.)

Of course, shippers have insurance on their loads, but that may not cover the cost of your time in straightening out things.

Freight that is truly damaged will not be accepted by a receiver.

In that case, it may become the trucker’s responsibility to find a place to dump the damaged freight.

We have been the recipients of so-called “damaged freight” that was still in usable shape.

(For example: Just because boxes of spaghetti were crushed did not mean that the pasta was no longer edible.)

Of course, no one should go out of his way to damage freight on purpose for the sake of getting “free goods.”

That would be dishonest.

The Limits of Pallet Wrap

You can see from the photos on this page that there is a limit beyond which pallet wrap will keep palletized freight upright.

We speculate that different types of stretch wrap or pallet wrap used in shipping have different strength tests (similar to the tensile strength of cable ties).

Obviously, the more times that the pallet’s stack is wrapped, the sturdier the stack will be.

However, it is the shipper’s decision on how much pallet wrap to apply to a stack and in what way (manually or by machine).

Money saving tip: Don’t slam on your brakes if at all possible.

Of course, there are times when a trucker is cut off by a vehicle and sudden braking prevents a nasty accident.

Bear in mind that depending on weather conditions, slamming on brakes could lead to a jackknifing situation.

Keep track of the time you spend restacking freight that has shifted or fallen. Ask your company to pay you for your time.

If a lumper is available and you won’t get paid as much as the lumper to restack the freight, consider seriously whether or not you want to do it.

Trucking companies for which we have worked want their drivers to concentrate on driving and leave the lumping to lumpers.

If you experience more than one load coming from a particular shipper and going to a particular receiver that has shifted or is damaged, it might be a good idea to see if there is some preventive measure that can be taken to avoid problems in the future.

Be careful not to overwork yourself to the point of making yourself ill, such as with heat exhaustion or heat stroke.

If you have a choice regarding the type of freight you want to haul, you can avoid the problems associated with pallet-wrapped loads by hauling a different kind of trailer.

Protect yourself by taking photos.

Just about any kind of digital camera or Smartphone will do.

Back up your photos for safe keeping.

This is evidence, should you ever need it.

Fuel Pump Tip to Help You Prevent a Diesel Spill