When you live in a semi tractor for long periods of time, repurposing some items can help you make the “truckiness” more like a home. 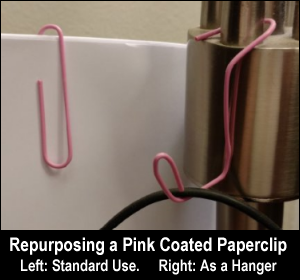 As we described on this page with regard to improvising a temporary fix for our ice chest, we learned the value of this old Depression era saying:

We must issue the disclaimer that you must never

In fact, we cautiously ask if substitutions can be made with regard to exercise equipment used in a truck.

With that in mind — and to get your creative juices flowing — here is Vicki’s favorite repurposing story (which took place outside a truck).

Buying an easel was out of the question because it was too expensive. Besides, she couldn’t see where she would ever use an easel that big again.

She could have borrowed an easel (assuming that she knew someone who had one in the size she needed), but she wasn’t sure when she would return it.

She went to her favorite thrift store in Columbia, SC, where she has purchased many a dress and casual shirt for Mike for only $1 apiece.

As it turned out, that thrift store has a second building that contains larger items like old appliances and filing cabinets. 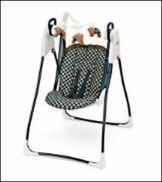 She went mulling around and saw an easel-like frame, but not exactly.

It was in very used condition (especially since the connections at the top weren’t in place) but it looked suitable for her needs.

She asked the attendant, “What was it before it died?”

He said that he thought it had been the frame for a baby swing!

At left is a new baby swing with its frame.

At right is the game board resting against the repaired, used baby swing frame.

Repurpose Something For a Different Purpose

In this section, we will cover repurposing an item for a different purpose than that for which it was originally intended.

The new functionality can be along the same lines as the original or completely different.

In the case above, repurposing the baby swing frame as a game board easel was completely different from its original purpose.

With that in mind, here are some of the items that we have repurposed for use in the trucks we have driven. 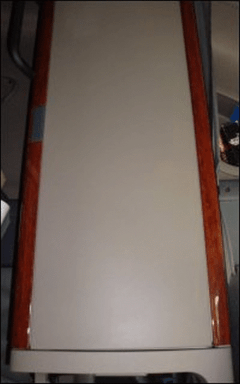 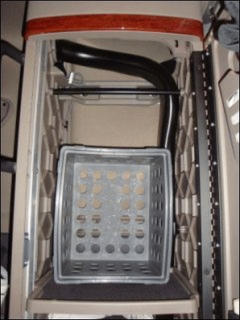 At far left is a photo of the tall storage cabinet (with its door closed) behind the driver’s seat in a Freightliner Cascadia.

With its door open, you can see the interior compartment of the upper part of the tall storage cabinet.

You can see the big black pipe for the ventilation system in the rear and also a horizontal pole from which drivers may hang their clothes.

Since stacking most of our clothes makes better sense than hanging them up, we wanted a better way to stack them and organize them.

We bought a multi-purpose plastic crate and turned it on its side.

If fits well to let some clothes be stored inside and some on top. Instant shelf! 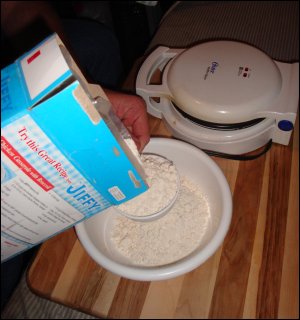 Speaking of shelves, we have used a large cutting board as an instant shelf in a cabinet on the other side of the truck.

And numerous food photos, like the one shown at left where Mike is making waffles, show us repurposing a very large cutting board as a “counter top” on which to prepare and cook food on top of the lower bunk in the truck.

There’s Nowhere to Install It?

Instead of using a fancy paper towel holder that is usually installed under kitchen cabinets, like the kind shown here from Amazon.com, with which we have an affiliate relationship… 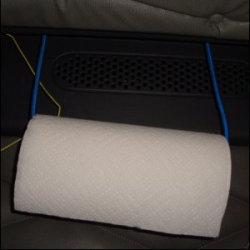 …we utilized a rubber stretch cord or tie down or bungee cord, loop it through the paper towel roll and hang it from the bottom of the top bunk.

We have also repurposed two Wal-Mart bags tied together to hang up a roll of paper towels.

Vicki tied the bags bottom-to-bottom in a tight knot that would fit through the roll and so that the handles are free to loop over a paper clip bent so that it will hang.

Why Didn’t I Think of That? 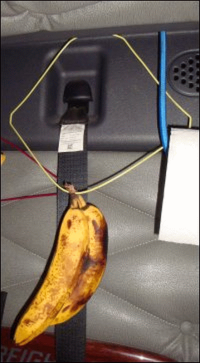 …we used a regular wire hanger which we suspend from the back of the upper bunk from which to hang bananas.

Note: the bigger and heavier the bunch of bananas purchased, the more stress will be put on the hanger.

Also, the bananas will have a tendency to bruise with every forward and back bump the truck makes as it is rolling down the road.

One could possibly hang them from a side wall, but the bananas might “rub” against the wall and start to peel and make a mess.

Storage on a Wall

We’ve tried a number of ways of storing fresh vegetables.

The best way to prolong their life is not by using Green Bags, but by keeping them either refrigerated or on ice.

However, prior to reaching that decision… 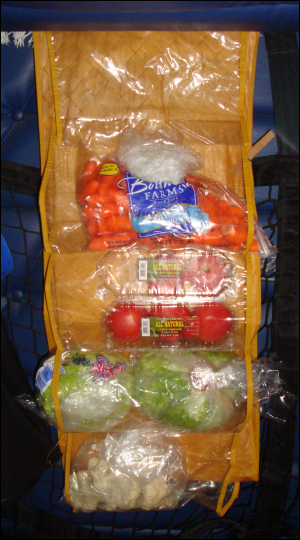 …we tried storing them in an old shoe organizer. This repurposing idea worked ok until the weight of the vegetables literally destroyed it.

One drawback of using this organizer was the small space of each compartment.

For example, only small heads of lettuce and cauliflower would fit in whole.

Eventually, we went back to storing all of our in-truck fresh produce in our ice chest.

Instead of using a swing arm towel rack for storing damp dish cloths and dish towels like the one shown here from Amazon.com, with which we have an affiliate relationship, we use a wire hanger looped over the back edge of the top bunk, with clothes pins to hold them in place. 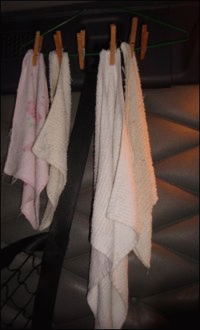 As shown, we are repurposing the hanger into a mini clothesline.

Out of the Room

The most common use of a shower caddy is in the bathroom to hold soaps, exfoliating pads, small bottles of shampoo and the like near the faucet.

However, we have used one with a built-in hook for holding things in different places in the truck.

When Mike was first issued a Freightliner Cascadia, one of the first things he noticed was the lack of storage space on the dash.

So we repurposed one shower caddy on the passenger side of the truck for Vicki to store things like pens, her camera and a handkerchief.

We used a second one (pictured at right) hanging off the side of the upper bunk to hold Mike’s glasses while he slept.

Remember that we said that the plastic crate that we use in the storage cabinet was “multi-purpose”?

Well, our repurposing efforts have led us to use it for moving things from the truck (such as truck-to-truck transfers).

We’ve also used a similar one as a foot stool for Vicki to elevate her feet when she sits in the passenger seat. 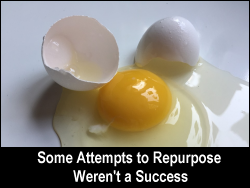 Not every attempt we have made at repurposing an item has had positive results.

For example, for awhile, we packed raw eggs (in their shells) in a canning jar, cushioned by paper towels.

Most of the eggs stayed unbroken until they were removed, but there were times when the truck’s movement caused the jar inside our ice chest to rock so that an egg broke against the hard glass surface.

We could get up to 8 eggs in a wide-mouthed quart jar.

But since we were out on the road for up to two (or three) weeks at a time, we wanted to pack more eggs more efficiently.

We had disastrous results (many broken eggs) from using the kind of egg carriers that campers sometimes use.

We ended up landing on a good solution for us: using a medium-sized round plastic storage bin — the kind that can be used to store flour or sugar in a home kitchen — in which to cushion the eggs on cloth dishtowels.

We stored this bin directly in our ice chest.

To date, we’ve only ever suffered one cracked egg using this egg storage method.

Since room is at a premium in a semi tractor, a professional driver who has much to store in his/her truck has to be creative in finding or making storage solutions.

We encourage you to explore repurposing some items as we have.

There may be advantages or disadvantages to some adaptations or substitutions.

If it is important to you, you might want to make a list of what did and didn’t work.

Sometimes you just have to persevere until you find the thing that works best (like our example of how to best carry eggs).

We’re not about to give up eating eggs, so for us, finding a good solution was a necessity.

Overall, however, we have had many successes in repurposing, especially with Vicki’s favorite most versatile item of all: paper clips.

Money saving tip: There are many uses for things that people have found that aren’t readily apparent.

For example, you can Google “uses of canning jars” or “uses of Mason jars” to find how folks use them.

We used to use a canning jar to hold our utensils in the truck.

However, the clinking of the metal against the glass jar while the truck was moving really bothered Vicki; we ended up transferring not only all of our eating utensils but also all of our cooking utensils into a hinged plastic shoebox. 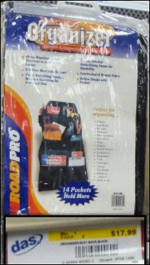 While not exactly repurposing, you can search for inexpensive “DIY” (Do It Yourself) ideas, too.

For example, many a truck stop sells seatback organizers like the one shown at left that was being sold at the time the photo was taken for $17.99!

Well, those aren’t too hard to make for a fraction of the cost.

Vicki has thought about making one (or perhaps a different kind of organizer) from fleece or another sturdy material.

Perhaps you can get your home support team to make one for you or find a good used one at a thrift store or yard sale.

For what it’s worth, we bought the shower caddies mentioned above for $1 apiece at a local dollar store, but other homemade solutions can be even less expensive.

Then there is the re-use type angle of repurposing.

Although the vendor certainly does not recommend their re-use, we have found that the best one-gallon containers for storing water in our truck are washed out thick-walled plastic apple juice jugs.

They are ever so much sturdier than the flimsy plastic one-gallon jugs that water is normally sold in, even the ones sold near water vending machines.

If you intend to re-use items like this, make sure that they are properly cleaned first.

Do you have a repurposing success story?

Return from Repurposing Items for Better Use and Function in Semi Tractors to our Packing List page or our Truck Drivers Money Saving Tips home page.

How are Sleep Labs, Insurance Companies, and Hospitals Holding Truckers Hostage to Unreasonable Pricing Tactics and What to Do About It

Truck Drivers Money Saving Inquiry: If you have an APU on your tractor, how often do you have it serviced and at what cost? Is it worth it? 🚚 💵 ✔ #TruckDriversMoneySavingTips#TruckersSavings#trucker#truckapu#auxiliarypowerunit#truckelectrification#truckfuel ... See MoreSee Less