If you drive a truck for a living (particularly long haul) and would like to sleep better when you retire for your mandatory rest break each day or night, you may benefit from the info we have assembled on this page. 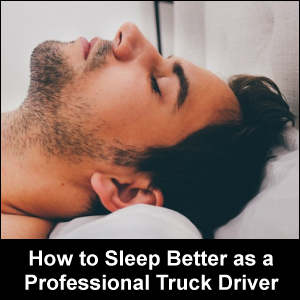 As we will describe, we have personally used or benefited from numerous points below.

Part of the reason why the Hours of Service regulations are in place is so that professional truck drivers will have enough time to sleep so as not to become drowsy or fatigued behind the wheel and cause accidents.

There are those who persist in saying that the number of truck accidents due to fatigue is higher than it is.

The Owner-Operators Independent Drivers Association (OOIDA) put this to rest in October 2010, saying that, “… fatigued driving was coded as a factor in only 1.4 percent of fatal large truck crashes ….”(1)

However, we think you would agree with us that even one accident due to a professional truck driver not having been able to sleep better is one too many.

Challenges to Being Able to Sleep Better

There are many challenges to being able to sleep better in a truck, none of which is helped by the fact that you may be in a different location every night with different surroundings.

You may be kept awake — or awakened from sleep — by any number of things.

These are some of the common sleep inhibitors and interrupters for truckers:

Factors that cause one person not to sleep better may not affect another and vice versa.

So, we’re going to address each of these items individually and in detail.

Now we must issue the disclaimer that part of the challenge that many professional drivers face is finding truck parking to begin with.

This can be very frustrating in the northeastern USA because there are too few spaces for the trucks running up there.

But assuming that you do find a place each night, here are tips on how to sleep better.*

An External Challenge We Have Faced to Sleeping Better

Perhaps you have had this experience.

You’re sound asleep in your truck in what you think is a safe, legal parking space — even in a truck stop or rest area — and around 2 or 3 in the morning, there’s a knock at your driver’s side door.

If you don’t answer it or make other arrangements, there may be another in about 30 minutes, and another 30 minutes after that, etc., etc., ad infinitum, ad nauseum.

We’ve had this happen to us a number of times in states ranging from South Carolina to Connecticut.

He found a spot, but it was the worst night’s sleep on the road Vicki had ever had.

She counted five separate knocks on the door in the course of the night!

(Mike usually tries to ignore knocks on the door in the night, but Vicki can’t. Once her heart gets to pounding and the adrenalin is flowing, it’s hard for her to fall back to sleep.)

We have heard of various ways to ward off “lot lizards” and would be interested to know which of them really work the best for the least amount of money.

Opinions may vary, but Mike says that “no lot lizard” signs like the one shown at left don’t work.

There is a story about a trucker who once had a knock on his door in the wee hours of the morning at a truck stop.

He got up, pulled his cab curtain back, and saw a woman on the ground just outside his door.

He had already turned on his cell phone and was ready to use it.

He rolled down the window just far enough so she could hear.

He wasn’t disturbed for the rest of the night.

Another perspective on this situation is that a female knocking on a trucker’s door may need to be rescued from sex trafficking. To help with that, please visit TruckersAgainstTrafficking.org.

An Internal Challenge We Once Faced to Sleep Better

There was a time when the model of QualComm Mobile Communications Terminal (aka “satcom”) installed on trucks didn’t have an “off” feature or ability to turn the volume all the way down.

This is a photo of one model, but not the one we’re referring to here… 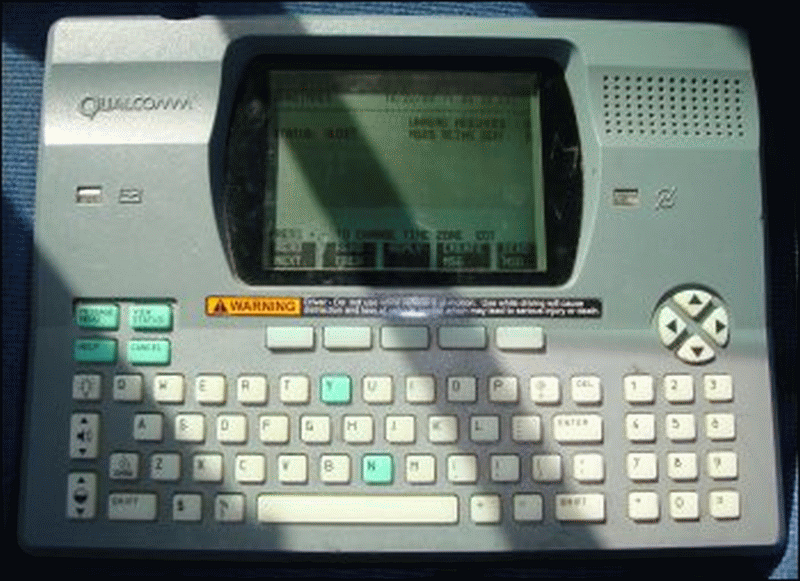 The first time Mike drove for Epes Transport, he was assigned to a new fleet manager named “Joey.” (Vicki was riding with Mike when this happened.)

Joey liked to send out non-essential messages over the QualComm.

In those days, whenever anyone sent a message over QualComm, the unit would emit a loud “BEEP!”

How is a person supposed to sleep better with that thing going off every time a message came through?

What could we do to temper, soften or reduce the volume of the beep?

Taping a cotton ball across the speaker area did not work!

Of course as is the case with many professional drivers, Mike’s sleeping schedule varied.

So there were times when he would be trying to sleep during the day after driving the night before.

And of course, Joey had a “day job.” (You may see where this is heading…)

It seemed that Joey sent out a lot of messages.

Mike tried reasoning with him about the number of messages he was sending, but to no avail.

One day after Mike had run particularly hard — and neither of us had been able to sleep better because of all of Joey’s messages — Mike parked his company-issued truck in a rest area in northern Kentucky.

Mike sent a message to Joey that he had been driving most of the night, he was very tired, he was going to bed, and he didn’t want to be disturbed.

In spite of Mike’s message, we pretty much knew what was coming.

So we wrapped the QualComm unit in a thick towel, then in a plastic Wal-Mart bag (to keep it from getting wet) and literally stuck it out the door!

We were able to sleep better. Whew!

We don’t recall how long we slept, but when we rescued the unit from its out-of-doors location, what to our wondering eyes should appear but a bunch of messages waiting for us from Joey!

Mike left the company to take a job elsewhere for awhile and didn’t have to put up with Joey or his “love notes” anymore.

When Mike went back to work for Epes, he specifically inquired about Joey and found out that he had left the company.

Nowadays, trucks with new QualComm MCTs in them can be adjusted so that the volume goes all the way down.

Now drivers can sleep better without all that “beeping” going on.

Money saving tip: Seek the low-cost methods of helping you to sleep better.

The costs to purchase ear plugs, an eye mask and a truck sun shade are all modest.

Even a more expensive item like a mattress pad can make all the difference and turn out to “pay for itself” in improved sleep.

Sometimes a fifteen-minute “power nap” can rejuvenate a person who didn’t sleep better the night before, but watch out for problems associated with Hours of Service regulations.

Keep your cell phone fully charged in case you need it.

Unless you use yours for an alarm clock for waking, turn it off when you go to sleep.

It has been argued that the electronic frequency used by cell phones can inhibit sleep, so use your own best judgment in this regard.

Some cell phones have settings that allow users who use the alarm clock setting to hear only the alarm (not ringing when a call comes in).

Many of the deodorizers or air fresheners that come on a string that can be hung from a rearview mirror quickly lose their scent.

So evaluate for yourself if this is a good value.

Nothing gets some people so riled up as disagreements with relatives.

Stewing on a situation mentally is sure to weigh heavy on your mind, preventing mental relaxation.

We’ve also found it beneficial to keep a clear conscience regarding all matters of life.

When you lie down to rest, you will sleep better, being at peace.

Return from How to Sleep Better as a Professional Truck Driver to our Health and Wellness page or our Truck Drivers Money Saving Tips home page.

* Some ideas on this page were adapted for truckers from Dr. Mercola’s tips:

Cooking a Ham and Cheese Omelette in Your Tractor Trailer