One day as we were exiting a truck stop, we saw the results of a truck driver’s right turn accident. Let us first set the stage. 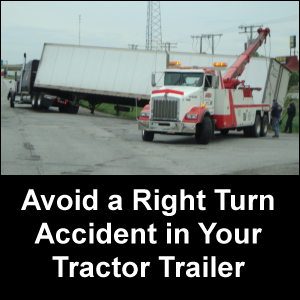 While we will address both of them on this page, you need to bear in mind that no matter who is at fault in an accident of this type,

There are numerous things that you need to protect, which we will address.

Making a Right Turn Too Far From the Curb

Below, you will see a very popular sign that you may have seen many times on the backs of tractor trailers.

(Note: This sign can be purchased on Amazon.com, with which we have an affiliate relationship.)

The sign shows a tractor trailer unit in the process of making a right turn with a four wheel vehicle coming up in the right lane at the place where a collision can occur.

There’s an interesting car-truck accident photo on Flickr that might appear to look completely like the car driver’s fault. But read the description. The photographer stated:

“The driver of the car pulled into the right-hand turn lane, right into the truck’s blind spot. The truck was in the next lane over, intending to turn right — which he couldn’t do from the turn lane, because that would mean dragging his rear wheels over the curb and taking out the flower bed.”

We can’t see the entire intersection, so we can make no judgment regarding the photographer’s claim that the truck “couldn’t” turn from the right hand lane. Was that because the road from which the truck was turning was a two-lane road?

The photo shows that many truck drivers had taken their trailer tandems over the curb in the past (although we certainly don’t recommend doing that!).

The angle of the shot shows at least three lanes on the road where the trucker was heading:

Assuming that it was safe and legal to do so, the truck driver could have swung into the opposing lane on the side street only long enough to complete the turn while keeping his trailer tires closer to the curb.

Had the trucker kept his trailer tires close to the curb, he wouldn’t have had a car try to pass him on the right.

There is a video on YouTube embedded below about which we must make comments, each one being associated with a time on the video in minutes and seconds (m:ss):

Two other things about this video bear noting:

Making a Right Turn Too Close to the Curb (or Ditch)

Below are photos that Vicki took of a tractor trailer right turn accident that took place just off truck stop property when a professional truck driver failed to swing far enough either ahead or to the left to avoid a ditch. 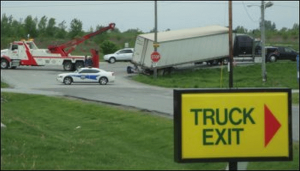 This was the view of the accident from the truck stop.

The sign in the foreground shows that the driver used the correct exit.

A tow truck had to be called in.

No truck traffic could exit onto the main street.

The tow truck is being connected to the rear of the trailer.

Can you see why the driver could not just drag his rear axle out of the ditch?

This is because the angle of the trailer in the ditch lifted the tractor’s left drive tires completely off the ground!

There’s a close-up of  this below.

The view from the road shows that there was plenty of room for the driver to pull out onto the road.

So there was no excuse for this not-so-wide right turn.

A group of men have gathered around the back of the trailer.

However, it appears that the lines from the tow truck are no longer taut. 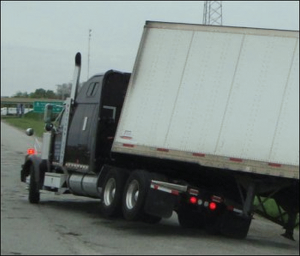 Here’s the close-up promised above.

This photo shows why the driver could not just pull his trailer out of the ditch after making a right turn without swinging far enough ahead or far enough out.

The angle of the trailer and its king pin connection with the tractor literally lifted the left side drive tires off the ground.

Without traction, the truck went no where.

Every truck driver training school student driver should be taught not only the correct way to make right turns but also what can happen when that procedure is not followed.

Furthermore, professional drivers are continually reminded of the necessity of making wide turns because there are so many different signs to this effect on the backs of trailers, some of which are shown here: 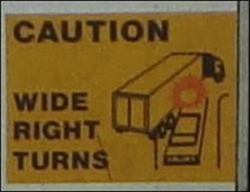 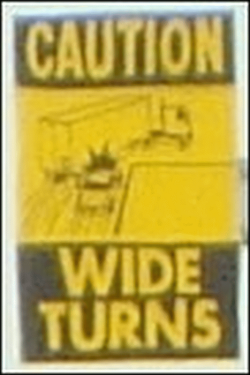 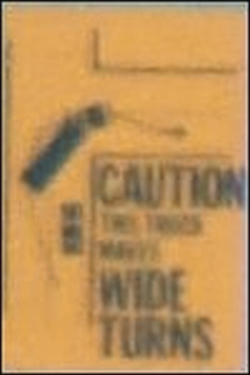 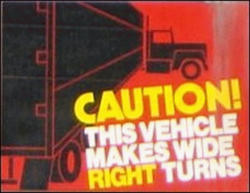 The Correct Method of Making a Right Turn

According to this glossary, a “button hook turn” is:

“A method of right-turning a Truck-Tractor Semi-Trailer in order to avoid curbing the trailer tires. This method creates a path that looks like a button hook and is considered the proper way to turn right.”

Since button hooks are not common in our day, it is worthwhile to show a

This is a dual-headed button hook, with two types of hooking mechanisms.

A nice illustration of a button hook right turn with a semi tractor trailer is shown a photo on this page.

Tricky Turns in a Tractor Trailer

Some right hand turns you may need to make are at more acute or more obtuse an angle than 90°.

If you are making a sharp right hand turn, be very careful to clear objects on your right side before proceeding.

Depending on the turn, you may be forced to find another route.

The map above of part of the city of Barnwell, SC, shows a sharp intersection between

If a driver was on SC 3 near the intersection and needed to get to US 278 on the left side of the map, would he or should he make a sharp right turn on SC 64?

In cases like this, if a driver has Internet access, it might be wise to zoom in on a satellite view so that he can tell if he needs to take a different route.

Here is a close-up of the intersection in Google Maps’ satellite view.

Do you see what’s on the corner of the intersection?

We do not think it would be wise for a truck driver to try to make a right turn — going south on Marlboro and turning right on Patterson — at this intersection.

It would be better to head north on Marlboro to turn left on Hagood Avenue and get to US 278 that way.

In most cases, follow the directions you are given by shippers and receivers on how to get to their locations.

Always double-check a shipper’s directions against a truckers atlas to make sure you stay on approved truck routes.

Although online maps are getting better, they may or may not be 100% accurate.

The same could be said of some GPS programs.

Intersections on roads are not the only places where truckers may have problems making right turns.

One must also bear in mind turning room in truck stops and rest areas.

We have personally had our challenges in clearing curbs and other trucks in these locations, particularly the ones that are tightly spaced or were built before longer wheel based tractors and longer trailers were manufactured.

This is especially true in the northeastern USA.

When in doubt about your truck’s ability to clear other fixed objects, get out and look.

Don’t be afraid to ask for help.

On our CDL Road Test page, we record this true account:

The first time that Vicki drove a truck in the city, she was instructed to make a right-hand turn from one street onto another. Although in her mind she knew that she was driving a commercial vehicle, somehow the thought of making sure that the trailer cleared the curb hadn’t quite sunk in. She came close to hitting a telephone pole. 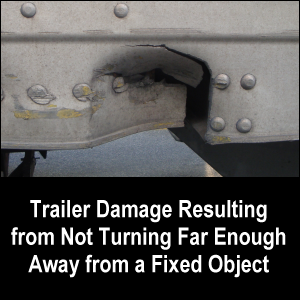 Besides telephone poles, there are

that you may need to clear when making right turns.

Here are links to other photos where trucks got involved in right turn problems.

There are also moving objects to watch out for, like ultra small cars and motorcycles/mopeds whose drivers sometimes feel they have a right to squeeze into the smallest possible spaces to get ahead.

Also watch out for bicycles.

Money saving tip: Preventing an accident is far better than having to deal with its aftermath.

Not only is there the cost of the tow truck and/or repairs, but you may face disciplinary action by your trucking company (such as being put on probation or worse).

If law enforcement is called on the scene, you may receive a citation or ticket.

As painful as that is, the recurring effects on your insurance linger far afterwards.

If you are an independent driver, you will most likely see an increase on your commercial truck insurance rates.

However, it doesn’t end there.

Since American drivers can have only one drivers license (which covers driving a commercial motor vehicle and your personal vehicles), your personal automobile insurance rates may go up.

In cases like this, you may want to contact a trucker attorney to see if charges can be reduced or worked off by going through a drivers education class (possibly online or by correspondence course).

There is also the cost in terms of time when you’re delayed by an accident.

You will never be able to recover it.

When visibility is lower — such as when you are driving at night or in snow or in heavy rain — you need to be especially careful about making turns.

Never be “in a hurry” when making turns.

Take the time that you need.

Other drivers may get impatient, but don’t let their impatience become your problem.

They aren’t driving your truck; you are.

Do not presume that you can turn right on red (when a traffic light is red in your direction) in all locations, even if it appears to be safe and legal to do so.

Even the most experienced among us need to keep our skills honed.

Return from Avoid a Right Turn Accident in Your Tractor Trailer to our Truck Operations page or our Truck Drivers Money Saving Tips home page.