Most of the large trucks we have driven have had a truck cruise control installed. 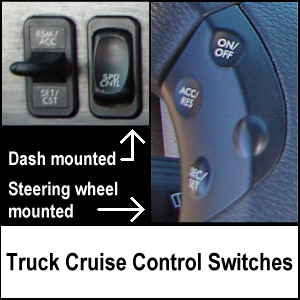 They can be wonderful devices but also very dangerous.

We will provide some details on this page.

As you may know, we have only ever been company drivers professionally.

Trucking companies are entitled to spec out their own trucks as they see fit.

We became aware of the potential for using the cruise control feature of commercial motor vehicles with our first trucking company, Swift Transportation.

Possibly because Swift hired (at least at that time) a lot of rookie and newbie drivers, they had rigged their trucks to allow the truck cruise control feature to work only when the headlights were off.

We presume that the company did not want its less experienced drivers to leave the truck speed control device “on” at night when the drivers were less likely to be alert.

However, it makes us wonder why they would hire drivers in the first place whom they did not trust to be alert at all times in their equipment.

But that’s a discussion for another time…

In Swift’s trucks back in the early 1990s (and possibly today), as soon as the headlights came on, a relay prevented the cruise from being set.

This was hard on drivers who did their driving at night, especially for a team driver who frequently had the night-time driving shift (like Vicki did).

Although it was supposed to be a secret, there was a way to override the setting.

It was Mike’s trainer who told him what the secret was and where to fix it in the truck.

As long as we drove for Swift, we used this little trick.

(For liability reasons, we’re not going to reveal it here. Besides, newer model trucks may not even have the same set-up.)

Why Use a Truck Cruise Control?

As you may know, a cruise control allows the driver to set the speed of the vehicle.

This works perfectly fine on flat or slightly hilly terrain.

In very hilly or mountainous terrain, the controller does what it can to keep the vehicle at the speed set.

However, depending upon the size and weight of the vehicle, the device may disengage and the vehicle has to be downshifted to a lower gear.

If you desire to do so and if it is possible to set your vehicle to operate a cruise in lower gears, you will need to learn how to do this.

The speed control device is especially useful on roads that are not heavily traveled or where traffic is fairly light.

If you are traveling on moderately or heavily congested roads, you should never engage it.

As we have already noted, a professional truck driver can get better pulling power in certain types of trucks when the weight is fairly even between the drive axles and trailer tandems.

This is true whether or not the truck cruise control is engaged.

When Mike was a driver trainer, he once had a student co-driver (“CC”) who refused to use the cruise to let the engine work more efficiently.

He liked to “work the fuel pedal.”

He claimed that by using the cruise, he was more likely to fall asleep.

If it was the case that he fell asleep when using a cruise control, then we hazard a guess that he needed to get better sleep during his rest breaks. 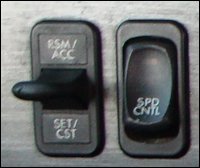 This photo shows the cruise control or speed control switches on the dash of one of the trucks — a Freightliner Cascadia — that Mike drove regionally for a while. 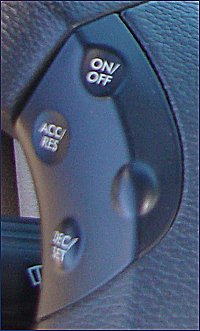 This photo shows the controls for the cruise control on the steering wheel.

In other commercial motor vehicles we have driven over the years, all of the cruise control switches have been on the dash.

We have never heard of this happening, but a possible downside to moving some of the controls to the steering wheel might be premature electronic failure of the button(s).

The advantages of using a truck cruise control include:

The disadvantages of using a truck cruise control include:

As a professional truck driver, you are hopefully aware that the speed limits posted on ramps for entering and exiting interstates and other larger roads are geared for cars, not heavy trucks.

Always disengage a cruise control when driving on these.

This animated graphic shows what happens if a truck takes a ramp too fast.

In case you’re wondering how severe an accident of this sort can be, a large truck was involved in a 2009 collision when, according to authorities, the driver’s truck cruise control was set.(1)

Not All Truckers Agree

Not all drivers agree that using a truck cruise control is a good idea.

On July 5, 2012, TruckingInfo.com ran an article in which lease owner-operator Carlos Cruz “forgot” where that switch is. Quoting him:

“I found with the cruise control, it was always powering me up the hills like it wanted to get to the top as fast as possible,” he notes. “Now I use the throttle and watch the rpm so I can take advantage of the torque the engine makes. Sometime have need to drop a gear, but if I think I can get over the top without a downshift, I’ll lug it and let the engine work a little harder.”

At this point his engine may actually not be delivering optimum efficiency. At 55, he says he’s running about 1,270 rpm, which is actually a little low, considering the torque curve of the engine. He’s close to the lower end of the curve, and that requires more frequent downshifts.

“Now I’m experimenting with different speeds going into a hill,” he says. “It seems that hitting a rolling hill at 58 rather than 55 gets me further up the hill before I need to downshift, and sometimes I don’t need to downshift, so a little extra speed may actually help in some cases.”

This just goes to show that truckers should understand their own individual rigs and do what is best for fuel efficiency all the way around — including when to use a truck cruise control.

Money saving tip: A 2005 article (updated in 2009) on Edmunds.com revealed the results of a test on a car cruise control.

The results were an average savings of 7% and up to 14% savings on fuel. Of course, conditions applied.

What about a big truck?

A whitepaper from CumminsEngines.com — entitled “Secrets of Better Fuel Economy” — placed in its “short list of behaviors exhibited by those drivers that consistently obtain good fuel economy” the following: “High percent distance in cruise control”.

Later in the same document, we read: “Cruise control can be a great equalizer. While some of the very best drivers may still be able to obtain better fuel economy without using the cruise control, cruise control in general can make every driver better than average.”

Learn the idiosyncrasies of the unit in your truck to get the best truck fuel economy possible.

If possible, learn the cycles of stoplights.

Also, learn to expect the unexpected from other drivers.

Know when and where you should and shouldn’t use the device.

Never drive faster than you can see ahead with your headlights at night.

Always be prepared to stop.

Determine when using your rig’s cruise will help or hurt — and use it to maximize your fuel efficiency.

Return from On Truck Cruise Control Use: Pros, Cons and Warnings to our Truck Operations page or our Truck Drivers Money Saving Tips home page.