If you crave poultry for meals, cooking crock pot chicken is the easiest way we know of to fix it in a big truck. 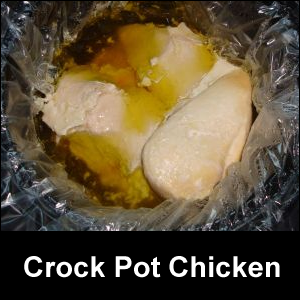 We will show you how we prepared one batch and used the meat. We’ll also provide you with tips on how to save money.

First, you’ll want to be sure that you have a way to keep both raw chicken and leftovers cold. We cover various cold food storage devices on our meal preparation page.

Second, you’ll need to gauge the amount of meat that you prepare based on your needs and the size of your crock pot.

Third, you would do well to consider preparing enough meat for several meals, not just one. There are thousands of recipes that use chicken.

If you cook a goodly batch of crock pot chicken, you’ll just want to make sure that you eat all of what you have prepared in a timely manner so that it doesn’t spoil.

Fourth, consider what parts of chicken you want to eat. Some people are strictly “white meat” folks; others prefer the juicier “dark meat.”

The parts that we’ve found most common in American grocery stores are breast, wing, drumstick and thigh.

With some parts, you then need to determine if you want further processing like skinless, boneless or both skinless and boneless meat.

The Way We Cooked It 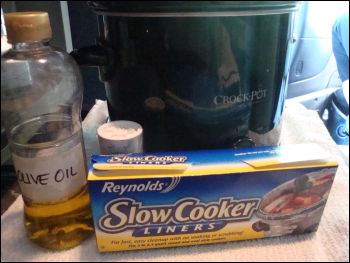 Our preparation of Crock Pot Chicken couldn’t be simpler.

We use a crock pot, a slow cooker liner, a dab of olive oil and seasoning.

While salt is shown here, we usually use chicken bouillon cubes for flavoring and skip the oil. 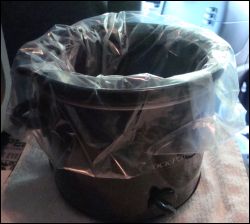 Mike put a slow cooker liner in the crock pot.

Not only did this help with clean up, but assisted with keeping the poultry from sticking to the sides of the pot.

When our crock pot chicken was cooked and cooled, we closed the bag, sealed it with a wire tie, put it in another sealable bag and put it in our ice chest.

For ease of preparation, we started out with boneless skinless chicken breasts.

This is one of the most expensive ways to buy chicken, but there is no waste (no bones or skin to deal with).

The meat does shrink a bit during cooking.

Depending on how hungry we are, we might eat three pieces of crock pot chicken between us (Mike eating two and Vicki one).

However, some of the pieces are so large — or our appetites aren’t that big — that we probably eat less. 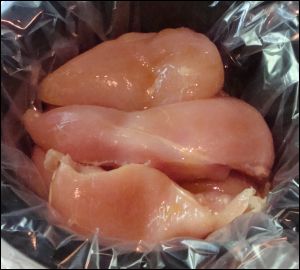 Here, the raw chicken is in the crock pot, having been lightly coated with olive oil and salted.

Vicki prefers to fix crock pot chicken with chicken bouillon cubes, using a ratio of 2:1 cubes to cups of water.

This provides the saltiness we like. You may choose less.

(Note: some bouillon cubes contain MSG, to which some people may be allergic.) 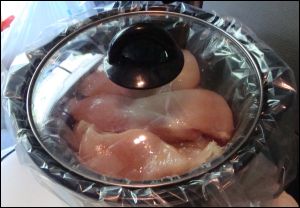 We put the lid on top, set the crock pot on “low” and let the poultry cook while Mike drove down the road.

As always, we braced the pot against tip-overs in transit.

Depending on your crock pot’s heat setting, it may take hours to cook the meat. (You never want to eat undercooked chicken.) 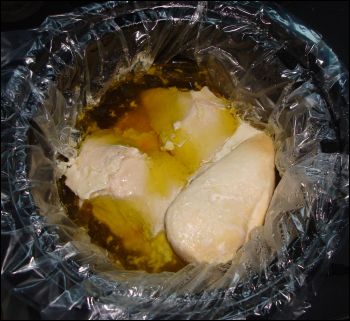 This photo shows what the cooked crock pot chicken — that has been cooked with chicken bouillon — looks like (two breasts having already been removed from the pot). 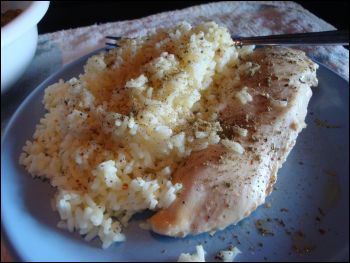 One of Mike’s favorite dishes is chicken and rice.

Here is one of the boneless skinless breasts from a batch of crock pot chicken with rice.

We have prepared rice a variety of ways.

The easiest way we have found to fix it in the truck is via hot pot.

Here, a little sage is sprinkled on top.

One of the neat things about cooking a batch of crock pot chicken is all the ways that the cooked meat can be prepared into other dishes. 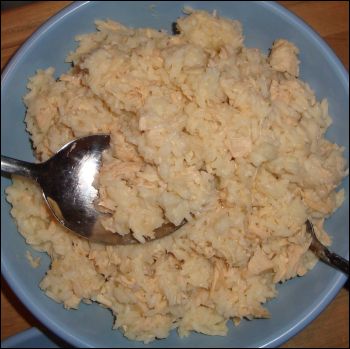 This is homemade chicken and rice pilaf, which we fix by using crock pot chicken, rice and cream of chicken soup. 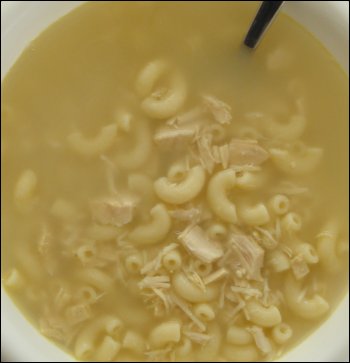 Bring the water to a boil with the bouillon.

Cut the chicken into chunks.

Cook the macaroni about 6 minutes or until done.

While the macaroni is cooking, add the chicken so that it will be hot when the pasta is cooked.

If you like, you can add frozen or canned mixed vegetables (if canned, drain off liquid first).

If you prefer, you can cook rice or barley instead of pasta.

Another option is to cook chicken in a crock pot with barbeque sauce, similar to how we prepared barbeque pork.

The total cost of crock pot chicken depends greatly on the cost per pound of the chicken and to a lesser degree what you fill out your meal with.

So we’re going to do this calculation a little differently than we have for some of the other foods we have written about.

Multiplying the cost per pound in the left column by the number of pounds in the top row, we can figure the total cost of the chicken.

If we use non-stick spray instead of a slow cooker liner, we would make the change in our calculation.

Also, the cost of either salt or the chicken bouillon would increase the total cost only slightly.

(We estimated on our split pea soup page that the cost of beef bouillon cubes was about 4 cents apiece and reckon that that would be the cost for each of the chicken bouillon cubes as well.)

Don’t forget that if your serving size is smaller than a pound, you need to divide the cost by the number of servings to get the per-serving cost.

For example, if you bought 6 pounds of skinless boneless chicken breasts at $1.75/pound (see the green highlighted cell in the table above), your total cost for chicken would be $10.50; but with 1/2-pound servings, you would split the cost by 12, bringing the cost to $0.875/serving.

Compare that to a chicken dinner in a truck stop restaurant.

Money saving tip: Look for good quality chicken at the lowest price you can find.

Many stores sell whole chickens or parts packaged together (such as all thighs).

Sometimes, you can find a better unit price (price per pound) by buying larger amounts.

Be aware that not all chicken is the same. We read a report about a chicken producer in the United States that treated chicken eggs with antibiotics but labeled them as raised without it.

The safe route may be to buy only “organic chicken,” but it may be much more expensive.

You will also want to be sure that you thoroughly clean everything that the raw chicken touched so as not to spread food-borne microbes like salmonella.

There’s no sense saving money by cooking chicken in your truck and then getting sick (and losing work time) due to an illness that you could have prevented.

Hot water and soap work wonders. (We use our hot pot to heat up the water and blue Dawn dishwashing liquid for cleaning up.)

Some chicken parts sold together are much more expensive than others.

(We’ve never figured out why, other than attributing the difference to supply and demand.)

The more processing the parts go through, the more expensive they tend to be.

When taking cost into consideration, consider your costs in waste removal.

Does it bother you to have to dispose of chicken skin (raw or cooked) or chicken bones?

Also, you’ll want to remove the discarded parts of the chicken and packaging from your truck well before it starts to stink.

Contrast the cost of a package of boneless skinless chicken breasts that you can prepare for multiples meals with cost of just one dinner at a truck stop buffet.

Return from Crock Pot Chicken: An Easy Way to Fix Poultry in Your Truck to our Food and Recipes page or our Truck Drivers Money Saving Tips home page.

Know Where Your Money Is Going