When my husband and I drove as a professional truck driving team, we were asked twice to give up going home toward the end of October and toward the end of November in order to move freight needed for Christmas. 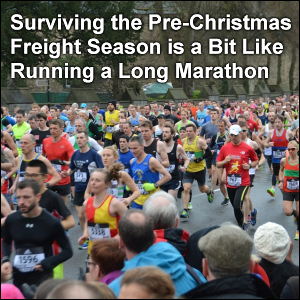 So, from the beginning of October, we planned on being out on the road for nine weeks straight.

This was tough for folks like us who wanted to “go home” at least once a month to catch up on mail and do other things that could only be done in our home town.

When I say “go home,” we actually had no physical residence at that time.

We had voluntarily put our belongings in self storage and parked our car at a company terminal.

This was part of the trucker transition that we came to grips with after we decided to become truck drivers.

In order to prepare for a 9-week stint on the road, we lined some things up in advance, including:

Preparation for the Job 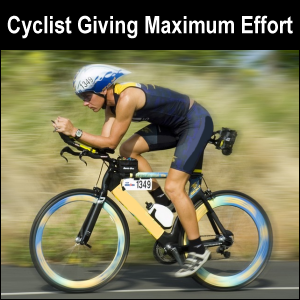 Like the cyclist shown here giving maximum effort, we applied ourselves to the utmost during the pre-Christmas rush, knowing that we’d have about 9 days off at home — that is, in a motel — around Christmas and the New Year holiday.

We cheered ourselves up by decorating our truck as frugally as possible.

At that point in our truck driving careers, we did not have laptop computers — let alone Internet on the road — or Smartphones to keep in touch with family and friends.

But we did the best we could from the road.

These days, it is so easy to stay in touch by phone, by email, by Facebook and the like.

Prepare yourself for any lengthy time away from home with

Even though it may be cold at that time of year, you will still need to pay attention to keeping cold food cold.

We mastered the art of preparing a frugal in-truck Thanksgiving dinner that was every bit as tasty as what we could get in a truck stop restaurant.

If you’ll be out on the road for a long period of time, see if you can set goals for yourself in the form of a game to keep yourself mentally occupied so that you won’t feel lonely.

Regardless of how vital it is to deliver freight by a certain date, never feel that you must drive when it is unsafe to do so.

As the old saying goes, “the fastest way to cool off a hot load is in a ditch.”

You are the captain of the ship in your truck.

What else might a professional truck driver need to stay frugal and survive the pre-Christmas freight season?

Note: This article — which was originally written and published on October 9, 2014, by Vicki Simons — was updated slightly in 2018.

Your Emergency Fund Protects You from Unexpected Expenses, Loss

Truck Drivers Money Saving Inquiry: Ever wish you had taken your own towels or washcloth with you into a truck stop shower? What happened?#TruckDriversMoneySavingTips#TruckersSavings ... See MoreSee Less

Truck Drivers Money Saving Tip: To prevent a surprise from a truck stop shower not having a needed blow dryer, take your own with you.#TruckDriversMoneySavingTips#TruckersSavings ... See MoreSee Less